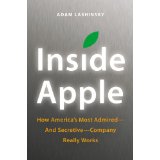 I expect many of you have read at least one book on Steve Jobs and Apple since Jobs’ death. If you, like me, grabbed and consumed a copy of Steve Jobs by Walter Isaacson, I have a recommendation for you. Go buy a copy of Inside Apple: How America’s Most Admired–and Secretive–Company Really Works by Adam Lashinsky. It’s much better, much more interesting, and in many ways, more revealing.

I’ve long admired Lashinsky’s writing in Fortune. Sometimes he makes me want to scream when he missed the mark, but often he gets under the surface of what is going on an covers it in an interesting and compelling way. He doesn’t write puff pieces while at the same time avoiding the trap of always writing nastiness, especially unfounded stuff, that many journalists seem to have fallen into the trap of (which – I expect – was prompted by competition from bloggers and the endless fight for headlines and link bait.) Lashinsky has avoided this trap, which makes me enjoy reading him even more.

I wrote a short but extremely positive review of Isaacson’s bio on Jobs. I liked it a lot, but as time passed I felt mildly unsatisfied. I couldn’t put my finger on it until a dinner conversation with a friend who knows Isaacson and some of the back story of the book. It came up randomly in our conversation and after I told him what I thought he responded that he thought it was a huge disappointment. He said that Isaacson totally blew it and his publisher, and the pressure of “publishing now” undermine the potential for what he was working on.

My friends suggestion was a simple, yet profound one. Isaacson should have publicly stated that he was delaying the book for a year and then gone back and re-interviewed many of the people he’d talked to. He should have probed deeper on the character of Jobs and explored things that people might not have been willing to say – both good and bad – when Jobs was alive. And he should have taken his role as official biographer more seriously – rather than rushing a book out on the heels of Jobs’ passing, he should have paused, thought hard about how he was trying to portray Jobs, and worked incredibly hard to nail it.

His words rang true. And, as I read through Inside Apple I kept thinking about what my friend said. We all know that Apple is an intensely secretive company and the external (and internal) messages are tightly controlled. By Jobs. Now that Jobs is no longer around, the dynamics around this might change. It certainly would change in anonymous conversations with an official biographer. Regardless, another level of research, thought, and analysis would be powerful.

This is what makes Lashinsky’s book so interesting. He doesn’t focus on Jobs, he focuses on Apple. But by focusing on Apple, he does a magnificent job of exploring and revealing Jobs. As a bonus, this isn’t yet another story of Jobs’ progression from adopted son to the Apple II to Next to Pixar to Mac to iPhone to iPad. Instead, it’s a contemporary look at the company, what makes it tick, and how it really works.

Lashinsky gets to some provocative stuff. In a section about “the narcissist (Jobs) and his sidekick (Cook)” he discusses how the narcissist / sidekick relationship can be incredibly effective. In this one section, he nails the notion of a productive narcissist, which captures part of the psychology of many successful entrepreneurs I know. It’s much more subtle – and useful – than the normal “pathological narcissist” discussion that follows many entrepreneurs around. A tweet about this section in the book from me generated an email exchange with an organizational psychologist friend which gave me an even deeper understanding of this dynamic.

Overall, I give this book an A+. If you are into Apple, curious about it, use their products, or are curious about Steve Jobs and the other leaders at Apple, I highly recommend this book. And yes, I read it on an iPad.