We Will Miss You Matt 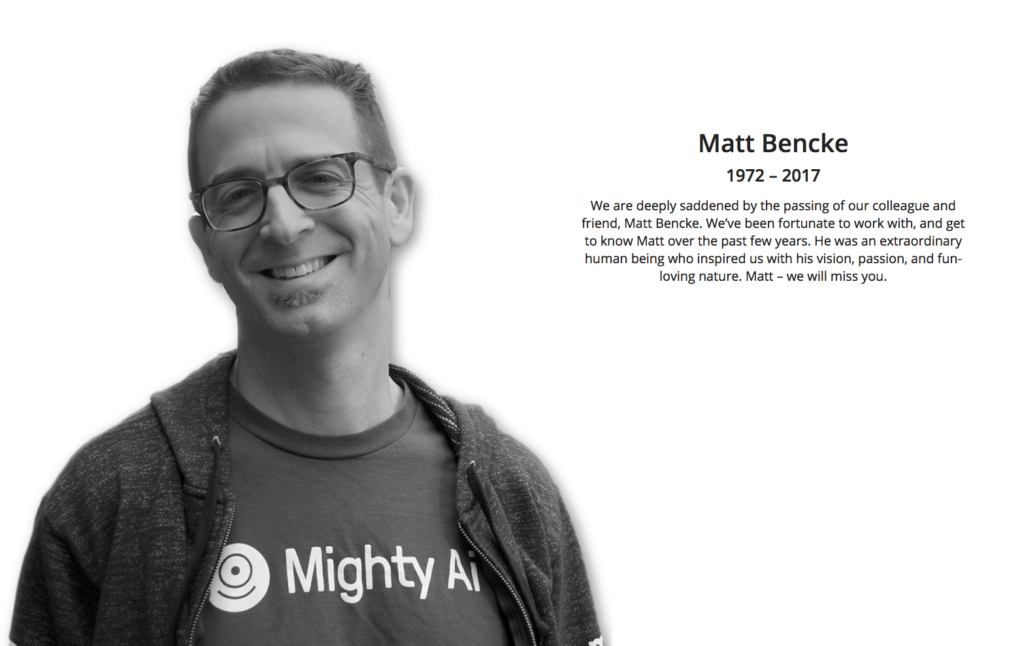 Matt Bencke passed away yesterday. We put the above photo and note up on the Foundry Group site yesterday but I was still processing it and wasn’t ready to blog about it until this morning. His partner and co-founder at Might AI – Daryn Nakhuda – wrote some beautiful words about Matt at In our hearts, always.

You may remember Matt from his incredible article in Wired Magazine titled The Day I Found Out My Life Was Hanging From A Thread. I added on to this in It Can All Change In A Day.

Matt found out about his cancer on July 28th. The day before he, and everyone else in his world, thought he was in the peak of health. My post was on August 24th. It’s October 20th. I’m struggling to process this time frame.

I measure the closeness of my friendships with a few specific markers. The one that shifts things into another level of intimacy is to spend a few days together with me and Amy. Matt and I had been planning to have him and his wife Amy (who I only know from a distance) come out to Aspen in September and spend a long weekend with us. That obviously didn’t happen and will be a hole that I always have in my life.

Matt – you were awesome and will always be in our hearts and memories.

It Can All Change In A Day

On July 28th, my partner Jason told me that Matt Bencke, the co-founder and CEO of Mighty AI, had suddenly gotten a serious cancer diagnosis. While Jason was on Matt’s board, I had spent plenty of time with him and, as one would expect, was shocked.

I immediately sent Matt a note that said:

I will keep confidential, but I wanted to send you love and good karma. You are a special person. I’ll be thinking good thoughts and sending you positive energy multiple times a day.

I didn’t know what else to do. Later that day, I got a note from Greg Gottesman, a close friend of ours who helped start Mighty AI – with a summary of what was going on.

1. He has a large clot in his right ventricle that needs removed. That is very likely to be open heart surgery. We are being transferred to Swedish Cherry Hill to start that process; surgery is likely tonight but TBD.

2. Initial pathology report does confirm what we knew was the most probable but worst diagnosis – pancreatic tail adenocarcinoma. We know it is Stage 4 because of the metastases to other organs. It is terminal and incurable, but how long he will have will depend on more information and how soon he can recover from open heart surgery and start chemo. MDs right now say could be over a year. We simply don’t know.

A day later, Matt sent me a short note in response that said:

7/28 was a Friday and Amy and I didn’t have anything planned. The evening was a quiet, reflective one. I still remember being empty of words whenever I thought about this. Matt is 45 and in incredible physical shape, so the reminder that this can happen to anyone hung quietly in the air.

No need for confidentiality

Your prayers and thoughts mean the world, thank you. This is still surreal. Of course I’m hoping for the best and I’m a stubborn Pittsburgh-born fighter…but the prognosis is clear.

This may sound weird but maybe I can turn this into a silver lining for others. When I’m feeling coherent i could do a webcast or some such

Matt has written an incredible essay that was published in Wired today titled The Day I Found Out My Life Was Hanging by a Thread. It’s extraordinary. In addition to reflecting the awesomeness of Matt, it goes through the intense few days of discovery, his emotional journey personally and with his family, while weaving in the backdrop of how a CEO, management team, company, and board deal with something like this unfolding in real time.

You know you are in for a powerful story when the lead in is:

“It started while I was on a Hawaiian vacation in May. I thought I’d just tweaked my back lifting a poolside lounge chair. Back home, my back pain became severe, and I started noticing nerve pain in my legs. For eight days I could barely crawl around the house. My wife and two daughters nicknamed me “the worm.” At 45, I’m in pretty good shape—avid cyclist, runner, weightlifter, yoga enthusiast with a resting pulse in the 50s.”

I read the draft of this when Matt first wrote it. Wired changed very little, which is a tribute to them for letting Matt speak in his authentic, unedited, and raw voice. For example, when describing the moment of the initial diagnosis:

“He went on to explain that I had many tumors in my liver, pancreas, and chest. In addition, he explained that I had quite a few blood clots, including in my heart and lungs. “What is ‘many’ tumors?” I asked. He looked defeated, saying they stopped counting after 10. I thought he might cry, and then he started in with some nonsense about how maybe it was all just bad tests, or maybe I had a rare water-borne pest infection. Amy began crying, hard. I went into silent shock and just tried to get this guy to shut up and leave.”

But that was just the start. Lots more transpired over the next day in the hospital. And then …

“On Friday the docs woke me with an urgent problem: They had found a blood clot the size of a Ping-Pong ball in my heart’s right ventricle. If it broke loose, I would die instantly, whether I was in an ER or my basement. To make matters worse, they showed me an image of the clot, and it was precariously wiggling on an already-loose attachment. Each time my heart beat, the ticking time bomb swayed precariously. The clot was too big to suck out with a vacuum, too risky to slice and remove bit-by-bit, and too large to remove from the side by breaking open a few ribs. Nope, removing it was urgent and would require cracking my sternum. Today.”

“Events were happening at a dizzying pace. Clearly I needed to start making some calls—to resign my role as Mighty AI CEO, to connect with my mom and other immediate family members, to alert more of my closest friends. It was around 9:10 Friday morning. Mighty AI’s weekly operations meeting would be getting started at 10:15, so I had a lot of calls to make.”

I hope I’ve inspired you to go read the whole thing at The Day I Found Out My Life Was Hanging by a Thread. I just went and read it again and it’s one of the best in the moment essays I’ve ever read. GeekWire has a nice add-on piece titled Mighty AI co-founder Matt Bencke diagnosed with pancreatic cancer, vows to ‘beat the odds’ as he hands over CEO reins.

Matt ended his essay with this:

“We are all so fragile. Each day is precious. And the most important parts of our lives are the relationships we invest in. I certainly feel that way, as my friends and family—“Matt’s Army”—have Amy and me awash in love that feels like a mighty waterfall.”

Treasure every moment. Love your fellow human. As Matt says so clearly. “The most important parts of our lives are the relationships we invest in.”

If you know Matt or are part of my extended gang and want to help, Matt’s Army has stepped up to Wage Hope at PurpleStride, the walk to end pancreatic cancer. Join us and donate something. And hug someone today.

Matt – we love you and are rooting for you.