The Shrike né Predator and I wish you a Happy New Year. 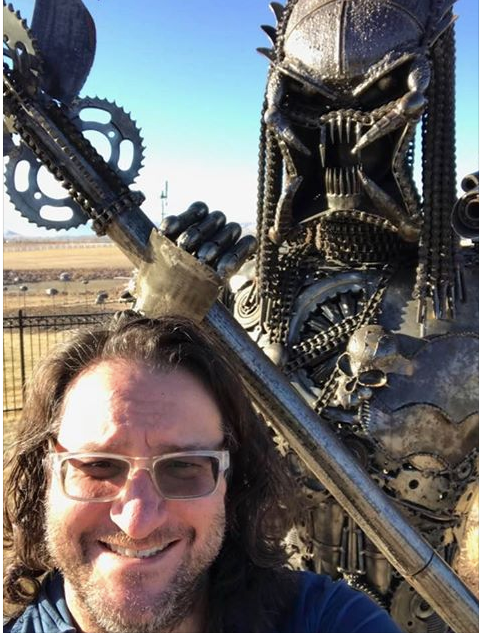 If you need a great blog to start 2017 with, give yourself the gift of following the Daily Overview. And, buy the book – it will blow your mind.

I’m glad it’s 2014. Last year was a difficult one for me as I hit a wall of depression that completely surprised me. I was over it by mid year and, while the second half of the year was better, I still struggled with figuring a bunch of stuff out about what I cared about as I turned 48 years old.

I stopped doing a few things last year. I stopped traveling for business. I stopped working on Saturdays.

I discovered great relief, and happiness, from stopping doing these things.

As I start 2014, I’ve decided to continue to stop doing things that are neutral to negative utility to me, in an effort to spend more time on the things I want to do, and do them more deeply.

Some of the things I’m stopping are ones that down deep I know are unsatisfying to me. Interacting with government at any level – federal, state, or local – has been a huge negative emotional drain. I’ve put a lot of energy into two issues over the past seven years – startup visa/immigration reform and patent reform. There has been almost zero change in either of these and the experience has been deeply unsatisfying. I’ve been incredibly distressed and agitated by the NSA / Snowden revelations. The idea of municipalization in Boulder, and my interactions around it, bums me out. I’ve realized that it’s not a game I like at all and that whenever I spend time on it, I’m a less happy person. So I’m not going to engage in 2014 and see how that feels.

For the past 25 years, my week days have started at 5am. I started experimenting with that a few months ago and, even though I’ve had some stretches where I’ve gotten up at 5am, I realized the thing I didn’t like was the oppressive crush of scheduled stuff that started at 9am and didn’t end until 6pm. I’ve lived an adult life of “manager mode” with only a few stretches of true “maker mode” and I desperately need – and want – more maker mode. So I’m stopping doing anything scheduled before 11am. I’ll get up whenever I want and my mornings, until 11am MT, will be unscheduled for me to do whatever I want with them.

I’ve been deeply conflicted with alcohol in 2013. I grew up in a house with no alcohol – neither of my parents drank. I drank plenty in college, but limited myself to just booze – no drugs (my parents scared my brother and I straight at an early age.) Over the years, I’ve gone through dry phases – up to five years – where I didn’t drink. In other time periods, including around the Internet bubble and 2013, I found myself drinking more than I felt was ok as I used it to dull the edges of the stress and anxiety. In addition to the negative physical effects, I spent a lot of mental and emotional energy thinking about “am I drinking too much.” I’ve always struggled with abstaining vs. moderating, so 2014 will be a year of abstaining from alcohol.

Many of you out there provided great support, friendship, and advice in 2013. I treasure all of it, even when it’s hard to hear, something I disagree with, or when I am simply not in a head space to act on it. As 2014 begins, I look forward to another year that is an interesting one on this journey called life. And by doing less of the stuff I don’t want to do, I hope to have more time to go deep on the things I want to do.