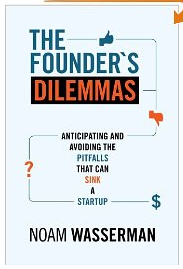 The Founder’s Dilemmas by Noam Wasserman is another book that belongs on every entrepreneur’s bookshelf. It’s excellent.

I met Noam for the first time last week when I was at HBS. I was on a panel of VCs (me, Mike Maples Jr., Kate Mitchell, and David Frankel) talking to a room full of HBS alumni who are VCs. Noam and I had exchanged several emails over the past few months and he sent me a review copy of the book but it got lost in my infinite pile of books to read. After seeing him and talking to him briefly, I decided to put it on the top of the stack. I laid on the couch all day yesterday with Amy and the dogs and demolished a pair of books. The Founder’s Dilemmas was the first.

I’ve never seen a book before that was particularly helpful – to a founder – about the wide range of issues a founder will face. There are plenty of books lots with stories, anecdotes, and suggestions, but none that are particularly systematic about going through all of the issues. Noam’s book is the first I’ve read – and he totally nails it.

He covers it three ways – with data, with analysis, and with stories. He’s done a ten year quantitative study that he follows up with his own analysis and then intermixes this with actual stories from a set of founders, including two that I know reasonably well – Dick Costolo (FeedBurner – I was on the board), Genevieve Thiers (Sittercity – we looked hard at investing but ultimately didn’t) and many I know from a distance. As a result, I was able to back test the stories and anecdotes and they were completely factual in contrast to many other books like this where the qualitative stories are embellished to fit either the ego of the participants or the point being made by the author.

Noam systematically marches through all of the major dilemmas I could think of for founders: career, solo-vs-team, relationship, role, reward, hiring, investor, failure-vs-success, founder-CEO succession, and wealth-vs-control. I believe he’ll coin several new reference phrases, including my favorite around wealth-vs-control (“do you want to be king or want to be rich?”) He looks at each of these from all sides (e.g. yes – you can be king and rich, but there are other options that may get you where you want to go faster and with a much higher chance of success) and uses a great blend of data, analysis, and anecdote to make and support his points.

If you are a founder, or considering being a founder, a board member, or an investor, buy The Founder’s Dilemmas right now. One of your goals should be to do everything you can to maximize your chance of success. This book will help a lot and you won’t regret the time you invest in it.