So Many Conferences – How Do I Choose? 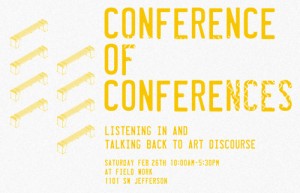 At this point I’m literally getting invited to a conference a day. I’ve never enjoyed going to conferences so I pick them carefully and am particular about the kind of things I go to. I regularly get asked how I choose which conferences to go to and I rarely have a good answer. So, after getting asked for the 4,317th time, I sent an email to Eric Norlin, who puts on three conferences that we have helped create and participate in (Defrag, Glue, and Blur) how he thinks about it. Eric’s thoughtful analysis – aimed at startups (and the entrepreneurs at startups) follows.

One of the natural consequences that comes with being in an “up” part of the tech boom/bust cycle is that there are an almost overwhelming amount of tech conferences, trade shows, and events that a startup could attend. These events offer opportunities to network with potential business partners, users, venture capitalists and customers, but they can also place a huge demand on a startup’s always scarce resources of time and money. So, the natural question is: which events should you attend and/or sponsor?

First, let’s understand the landscape (hat tip to Phil Becker for discussing this bit at length with me back in 2005): Imagine the entire range of tech trade shows and conferences on a spectrum. On the left hand side of the spectrum is the pure “expo/tradeshow” – you know the type — held at Moscone or in Las Vegas, hundreds of exhibitors on a concrete floor – think CES or Dreamforce. Sure, there’s often content at a “pure expo/trade show,” but normally the “expo floor” is something you can walk on to for free or very cheap ($100 bucks – usually less if you snag a discount code). The easiest way to identify an expo is to ask: who is the event organizer’s customers? If you’re walking around for free or nearly free, then it sure isn’t you (the “attendee”) — it’s the exhibitors. That’s important to note.

On the far right end of the spectrum is the “pure conference.” The purest conference format I’ve ever seen (and, unfortunately, it doesn’t exist anymore) was PC Forum. PC Forum was Esther Dyson’s legendary event. 500 people, ZERO sponsors (and zero sponsor dollars), one room full of keynotes — and at it’s height, you had to have an invite. And – oh yea – every single attendee paid. PC Forum was not cheap. But, the model was very clear: Esther didn’t want any sponsor dollars involved, and thus, the attendees were the only customer.

Between those far, end points of the spectrum, you get a mix of stuff. The three shows that we run (Defrag, Glue, and Blur) are at various points along the spectrum. And in truth, most shows are a blend these days. But the spectrum is useful because it can help a young startup understand what *kinds* of shows to think about attending.

So, with that in mind, what do you attend?

Let’s start with your “industry.” Are you a big data infrastructure company? Then write down all of the big data events. From this list, I’d begin with your goals. Are you seeking funding? Customers? Brand awareness? Business partnerships? Press? It’s really hard to find all of these in one event, so you’re probably going to have to pick and choose.

Next consider the type of interaction you’ll need to accomplish your goals. Example: if you’re a very early startup (seed/Series A), and you’re in enterprise software, then you’re most likely going to need more “hands-on” time with a customer prospect, as your product won’t be developed to the point where you can simply have people walking themselves through demos at a kiosk. That is to say that, in this case, quality of interaction outweighs quantity of leads. You’ll then seek out events that offer you intimacy of atmosphere over the sheer bone crushing flow of attendees on an expo floor. As you grow, you may find this dynamic changing, and thus you’ll change the type of shows you attend. (Sidenote: I run Gluecon – which is a smaller, more intimate show when compared against expos. I’m in no way suggesting that you shouldn’t attend expos – they absolutely have their place. It’s simply a matter of where your startup is in its lifecycle.) On the other hand, if you’re a consumer facing app that’s trying to make a splash ala Twitter, then you may forgo the smaller event in favor of trying your luck as SXSW.

So, how do you choose? First, ask around. Who do you know that’s been to what? What’s the reputation? Second, give yourself some geographic “spread.” If you have 12 events on your list and none of them are outside of Silicon Valley — well, maybe take a look at something in New York, or Boston. Third, break your list down into quarters — as a startup you have to balance how much time you spend on events versus on building your company. In the early days, you just won’t have the resources. I’d argue that a seed stage startup should be doing no more than 1 or 2 events per quarter (not including local meetups, hackdays , etc) MAX.

Checklist: Industry, Goals, Interaction, Reputation, Geography, No more than 1 or 2 per quarter (for Seed Stage; 1 per month for A/B round) — and you’re down to roughly 4-6 events for a seed stage company and roughly 10-12 events for an A/B round company.

“But aren’t there some conferences that I should just avoid?” you ask. Rather than speak badly about my competitors, I’d rather turn it around and say “which conferences should you always consider?”

I have always found the gang over at O’Reilly to be “straight-shooters” that put on awesome events. Start there. Throw in the company-run events that are specific to your case (Google I/O, Dreamforce, Microsoft’s events, Oracle OpenWorld, Adobe, etc), and then add in some independently run events (BigOmaha, Glue/Defrag, 360 Conference events). If applicable, add the monster shows (CES, SXSW) and the networking/startup shows (Launch, Disrupt). And, if you want an international flair, toss in LeWeb for good measure. There’s your starting point.

“Should we sponsor?” This is a tough question. If you have the resources and can make a clear case, then it can be very beneficial. If you do sponsor, avoid the larger expo events, you won’t have the dollars to throw at it to get noticed (attend those and take people out for drinks instead.) Stick with smaller venues where you can be seen and truly interact. And seek out conference organizers that will customize their packages for you (discounting, creating speciality packages, etc) — you shouldn’t simply be buying off of an inventory list like you’re shopping at Wal-mart.

That’s the beginning primer on picking conferences to attend if you’re a startup. Maximizing the value of attending or sponsoring is a whole other post for a whole other day.

Apply For The Glue Conference Demo Pod By Friday 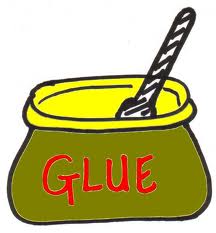 The Glue Conference is happening again this year on May 23rd and May 24th in Boulder, CO. This is the awesome conference that Eric Norlin puts on around our Glue theme. 500+ people obsessed about mobile app development, cloud computing, and big data are going to be there this year.

As part of the conference, Eric provides 15 early-stage startups with FREE exhibit space. Did I say FREE? Yes FREE! Alcatel-Lucent acts as the Community Underwriter for Gluecon and funds this activity.

The demo pods are designed specifically for the event that have lit signage included, hard wired internet drops included, space for your laptop (to demo) included, passes to the event itself included — basically everything you need to come show your early wares to developers, customers and venture capitalists. All you have to do is get to Boulder, which I’ve discovered through experience isn’t very difficult.

I’ll be there both days as will be my partners at Foundry Group. If you are an early-sage startup (pre-funding or seed funding) in mobile app development, cloud computing or big data, this is a great way to get some face time with us.

Did I say the demo pods were free? Apply now – the deadline is Friday.