Marathon #18 – the Kroll’s Diner Bismarck Marathon – has been conquered. My goal was to do it under 5 hours – I finished in 4:54:48. It was a small marathon – I finished #100 (out of 124) marathons, #1 (out of 1) for 45 year olds, but #10 (out of 10) for the 45-49 age group. So I got both first and last place on age, depending how you slice it (kind of like how investment bankers do their league tables.) RunKeeper Live worked remarkably well – Amy, my coach Gary, and whomever wanted to track my progress could in real time – and my iPhone still had 60% of its battery left when I finished.

This was my third marathon this year – the other two were Cincinnati (5:24:45) at the beginning of May and Madison (4:47:27) at the end of May. I had two great months of running over the summer in Europe, with my best month in a decade in Italy. I weighed in a little heavy (213) for this marathon – I’ll blame it on two months of amazing French and Italian food – but felt totally comfortable with the race. If I stay on track for the year, I’ll knock off six marathons, and my upcoming goals are 4:45 for Providence, finish St. Louis (the following week – no time goal), and 4:30 for Philadelphia a month later.

I’ve been to North Dakota once that I can remember – a trip out to Fargo to visit Great Plains Software (before Microsoft bought them). It was in December and brutally cold. Bismarck in September was better (50’s), but it rained all day Friday and during the race on Saturday. We stayed in a very simple hotel that was recommended by the marathon. It was fine, but only one wifi device could be connected at a time (and we had five, so there was plenty of AT&T traffic from our room). The restaurant scene was shopping malls and chains – we ended up having profoundly mediocre meals driven by ordering off of plastic menus. 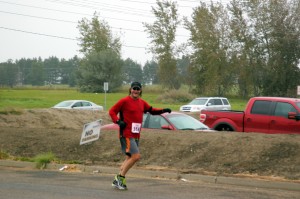 The flooding resulted in a change to a new course. This course was two loops – starting in a nice little park, looping at St. Mary’s University, with most of the course back and forth on a boring highway with a one mile hill (200 ft.) tossed in the middle. Overall it was a really dull marathon, although the people on the course were incredibly nice and helpful. All the water stops were staffed and they occurred about every mile. There was no food, but one person was handing out Jolly Ranchers so I managed to pick up four of them (ahem – two loops on the same road). The combination of the steady rain and lack of scenery made me very happy I had my iPhone with me. I was powered by Girl Talk, Mumford & Sons, the Decemberists, and Lady Gaga.

My sherpa (Amy) was once again awesome, including taking some great photos which are up on her blog. I love doing marathon trips with her – it’s always such a relief to have her waiting at the finish line for me. We were going to stick around and see Bismarck on Sunday, but after realizing we’d already seen it on Friday and Saturday after the marathon, we decided to head home a day early. Sushi on Pearl Street tonight – and no plastic menus.