I noticed something when I tried out two apps (Mingly and Cobook) this morning – they each immediately asked to connect me to Facebook, LinkedIn, and Twitter during their onboarding process. And, by using my Gmail as the starting point / authentication, they connected me to G+. 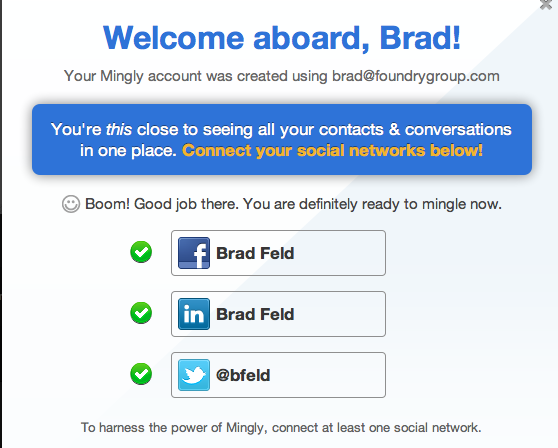 Microsoft is conspicuously absent from this. I’ve noticed this many times in the past but when you onboard yourself in two contact-related apps in the same morning and there is no Microsoft anywhere, there’s something going on that’s important. I wonder if this will change with Office 365 – I hope Microsoft is building a trivial to use oauth to O365 so it’s easy to connect to, along with a good sync API.

I was trying to think of other authentication that would be helpful to me in the context of my contacts. Almost everything else I use is based on either my email address or auth with one of these four services. Hmmm.

So far Mingly feels basically the same as Gist but Cobook seems different than anything I’ve used. I have no idea if I’ll keep using either of these, but like many things in the themes we invest in, I love to play around with new apps for a while and see if it sticks.