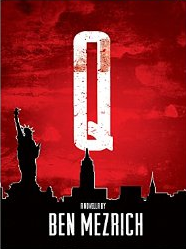 I am an enormous Ben Mezrich fan – I’ve read almost everything he’s every written. So it’s mind-bendingly exciting to me that he decided to publish his latest work of fiction, titled Q, with our publishing company FG Press.

If you don’t know Ben, his books including Bringing Down the House: The Inside Story of Six MIT Students Who Took Vegas for Millions (the book the movie 21 was based on) and Sex on the Moon: The Amazing Story Behind the Most Audacious Heist in History.

But he’s probably most well-known for The Accidental Billionaires: The Founding of Facebook, A Tale of Sex, Money, Genius and Betrayal which was the book that the movie The Social Network was based on.

I first met Ben through my long time friend Niel Robertson, an entrepreneur we’ve backed many times. I met Niel a few months after I made my first angel investment in NetGenesis in 1994 – he was the fifth employee. He went on to fund Service Metrics with Raj Bhargava and Tom Higley, which returned two-thirds of our entire first Mobius fund (I think the technorati are now calling those “Dragons” – this one was a baby Dragon.)

I’m in Boston one day for something and Niel emails me and says, “Hey, do you want to meet Ben Mezrich?” This is after Bringing Down the House but well before The Accidental Billionaire. “Sure, where?” I say. Niel knows me well, so he offers up sushi at some place in the Copley Mall. The next few hours were a really fun intellectual romp.

I haven’t seen Ben since then but our emails have crossed a few times. I love the origin story of Sex on the Moon (hint – Niel and other friends are involved, including Matt Emmi.) And I’ve continued to suck down whatever Ben writes.

Q is a novella that Ben has been working on for a while. It’s only available in Kindle format on Amazon. It took me an hour to read and I thought it was fucking awesome.

Whenever Amy and I  talk about the extinction of the human race, she has a very clear point of view on how it will happen. Viruses. That’s it – simple. When the Ebola thing happened a few months ago (hey – why isn’t anyone talking about Ebola anymore – it’s not like it’s solved?) Amy was all over it. As a result, I knew more about what was going on with Ebola than most other things I was exposed to.

Ben appears to have the same fears. AI becoming sentient and evil? Nah – that’s not a big deal. Viruses mutating, having a 75% infection rate, undetermined incubation period, and 75% mortality rate? Now that will mess up the way human society works.

If you are into fiction, what Ben has written, viruses, societal change, stuff that will scare the shit out of you, tragic heroes, slow motion train wrecks, and something that will slow you down and make you think, you’ll love Ben Mezrich’s Q.

And with that, I’ll leave you with a Q&A Ben did with FG Press for the book.

Why and when did you start writing “Q”? Was it because of the Ebola outbreaks? Q is a project I’ve been working on for about a decade, actually. I’ve always been fascinated by quarantine laws—how incredibly fast our world could change if an outbreak of an infectious disease started to truly get out of control. During the SARS epidemic, I started interviewing doctors and specialists and discovered how close we had come to some form of martial law in the United States. The Ebola outbreak just confirmed everything for me, that the response to a disease can sometimes be as terrifying as the disease itself.

How close do you actually think we came to a national quarantine? We were extremely close. For a time, SARS looked like it was going to explode— before it was stopped in Canada. Ebola, as frightening as it is, isn’t SARS. It’s not anywhere near as easy to spread. But with Ebola, the entire world is paying attention in a way it hasn’t before.

Are you a hypochondriac? How much of this do you think is really real? Definitely, I’ve gone through periods in my life where I was extremely crazy about infectious diseases, and I always thought I was coming down with something. At one point, my doctor wouldn’t even see me anymore. I’ve actually calmed down a bit since I’ve had kids, who catch every damn cold that comes around because the reality is, we all get sick, a lot, and it doesn’t do much good panicking about something you can’t control. This is just the world we live in.

There are CDC interviews in the book, but are they real? It looks like you used real names? Are they? I conducted real interviews, but Q is a work of fiction, and none of the names are real, except my own.

Have you put out a digital-only book before? Why do this with FG Press? I’ve never done something like this before. I’ve published fifteen books through traditional means, and have had a great time with them—but I also recognize that there’s this whole, uncharted world, and I wanted to try something new and creative. This is a book about a virus, and I like the idea of putting it out in a way that could go viral. I’m excited to see what FG Press has in store for something that’s a little bit out there, a little bit different.

What was your writing process for this book? Did you research first and then write, research as you go? Did your process differ because it was fiction? I spent a lot of time researching, obsessing, traveling, and trying to understand where we are heading. I was also very inspired by the book Fahrenheit 451, which I reread about twenty times while writing this; when I actually set out to write Q, I tried to get myself into the head of the people who will be on the front lines of the battle with the next true epidemic—the regular cops who will have to come face to face with people spreading the disease, once it truly hits a big city. It won’t be the scientists or the doctors who have to enforce quarantine laws, it will be police officers and EMTs.

You’ve started to write more pure fiction (e.g., “Q” and “7 Wonders”); is this something we can expect to see more of from you? I love both forms, and will continue to write fiction. Q is something I’ve had on my mind for a very long time, and it’s very different from anything I’ve ever written before. After Q, my next big book is nonfiction, a big true thriller that comes out this summer. It’s a bit of a secret right now. I can only tell you the title: Once Upon a Time in Russia. I’m also working on a second children’s book (I published one last year, the first in an Encyclopedia Brown type series, called Bringing Down The Mouse), the second in the Seven Wonders trilogy, and a TV show based on my book Ugly Americans.

If you’ve read this far and still haven’t bought the book, do a friend a solid and grab a copy of Ben Mezrich’s Q right now.