Book: The Business of Venture Capital 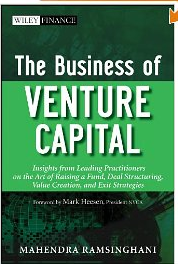 In the fall of 2010 Mahendra Ramsinghani reached out to me by email about a new book he was working on called The Business of Venture Capital: Insights from Leading Practitioners on the Art of Raising a Fund, Deal Structuring, Value Creation, and Exit Strategies. He asked for two things: (1) some of my time for him to interview me and (2) intros to other VCs and LPs. I made a pile of intros and didn’t think much more of it.

A few months later Mahendra send me and my partner Seth Levine an early draft of the book. We each gave him a bunch of feedback. I was deep into writing Venture Deals: Be Smarter Than Your Lawyer and VC with one of my other partners – Jason Mendelson – and it was neat to see how Mahendra’s book complimented ours. I also appreciated how much work a book like this was and tried to give substantive feedback.

In June 2011 Mahendra sent me and Seth a final draft of the book. I read through it and thought it was really good. When the book came out in October Mahendra sent us final copies. I turned the pages, smiled, and then went about my business.

I finally met Mahendra in Ann Arbor when Jason and I spent the day there in November, prompting my post College Is Like A Sandbox. Manendra and I spent some time talking about an idea he had for a new book and I agreed to help him with it (more on that later this week in another post.) In the mean time when I got home I dug up The Business of Venture Capital, put in on the top of my infinite pile of books to read, and figured I’d get to it soon enough.

The book is expensive, but if you are a VC, you can afford it. It’ll pay for itself many times over.