Now that Dick and Jane have added a CTO to SayAhh’s founding team, they’ve turned their full attention to working on their product. Today, we’ll look at the impact of the expenses to date on the P&L, Balance Sheet, and Cash Flow Statement.

Since SayAhh is in the pre-launch development stage, the company doesn’t have any revenue yet. They also haven’t launched a product, so there is no corresponding “cost of goods sold” – the direct cost of delivering their product. This results in a gross margin of $0, where gross margin is revenue – cost of goods sold.

The default Quickbooks setup uses “Income” to refer to “Revenue”. Since the Income (“Revenue”) line is $0 and the the gross margin is $0, Dick and Jane haven’t really noticed this yet. For now, we’ll leave it as is but once Dick and Jane meet with a mentor who is a CFO we expect this will change. 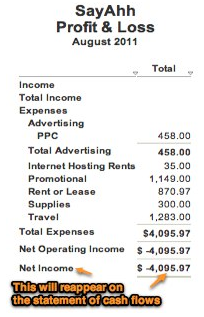 The largest expense a company usually has at this stage is salaries. However, Dick, Jane and Praveena have decided to initially forgo salaries which helps them conserve cash in the near term. A company at this stage could also face product development costs from consultants if they decided to outsource product development. However, Praveena has committed to personally get the first version of the product up and launched without outside consultants, so there is no expense here either.

Dick is focusing his effort on getting some early customer validation and is using a Lean Startup approach. Dick’s friend Samir, who is hoping to land a job with Sayahh, agreed to put together several static landing pages and email collection forms. Once these were up Dick launched several AdWords campaigns to test customer interest.

Dick, Jane, and Praveena decided to get a small office so they could work out of the same space. Dick recently had a child and didn’t want to use his house as it was too distracting, and both Jane and Praveena felt like their apartments were too small to all cram into. They made the decision that being together every day was better than working separately, so they signed a 1-year lease at $1500/month (prorated from mid-August) and they invested $1930 in capital improvements to remodel the entryway and install a sign. After signing the lease, Samir suggested that they could have saved a lot of money by using a co-working space but once the decision was made and the lease signed, there was no turning back.

In addition to the capital improvements (which show up on the balance sheet below as “Leasehold Improvements”) our fearless founders bought some tables, chairs, and a few other random things at Office Depot. Both the renovations and furniture purchases are “capitalized” on their balance sheet rather than being expenses on the P&L. While the cash is gone, the “expense” is “depreciated” over several years (depending on the type of asset).

Following is the balance sheet and the changes from July to August. 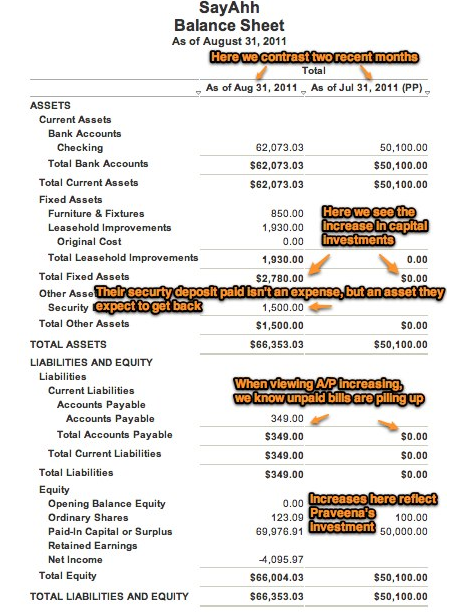 Our founders had some other expenses, including business cards and a trip to an industry conference where they talked to a number of potential customers. While the conference was educational, Dick and Jane were frustrated with the dull gaze they got from uninterested prospects when they tried to explain what they were doing, but couldn’t actually show anything. On the flight home from the conference, Dick and Jane agreed they both needed to help Praveena get the first product out, whatever it took.

Following is the third key financial statement – the Statement of Cash Flows. 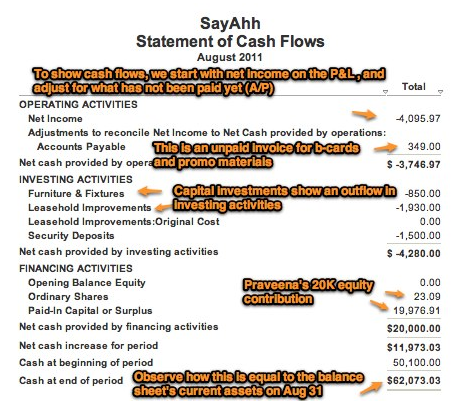 In total, SayAhh burned through over $8000 during the month. Annualizing this number, SayAhh could expect around $96,000 in negative cash flow for the year. However, Jane realized that $3430 associated with the new office space security deposit and rennovations is essentially a one-time expense. This resulted in an annualized burn rate more in the neighborhood of $55,200 ($4,600 * 12).