Linking First and Second Editions of a Book in Amazon

When the Second Edition of Venture Deals: Be Smarter Than Your Lawyer and Venture Capitalist came out, I was baffled that the books were listed as two separate Amazon items. The biggest impact was that all the reviews for the first edition did not sync with the second edition, so anyone coming across the second edition wouldn’t see all the first edition reviews. There was also a bunch of other content missing from the Second Edition page. In frustration, I wrote a post titled The Mess of a Second Edition Book.

For several weeks I dug into this with Wiley (my publisher) to no avail. I kept hearing back that the Second Edition is considered an entirely new book. I accepted that (it has a separate ISDN number), but I still wanted the two pages to be linked. The First Edition pointed to the Second Edition, but the Second Edition didn’t point to the first edition. And – none of the content on the pages was synchronized. I kept thinking some version of “c’mon guys – this is just meta-data – how hard could this really be?”

Dane McDonald, who works for me, eventually just took it on himself to figure this out. He went to the Amazon Author Central site, found, and followed the instructions.

Voila. Several days later what Wiley had said was impossible now worked. The two editions were linked and all was good in the world. Until the other day, when the books magically unlinked. Boo.

Yesterday, I followed the instructions again to relink the editions. This time I got a disappointing email from Amazon.

The books requested for linking, Venture Deals: Be Smarter Than Your Lawyer and Venture Capitalist ISBN 978-1118443613 and 978-0470929827 don’t meet the qualifications to be linked. Please accept my sincere apologies for this disappointment.

In order to be linked, books must have the same content. Linking books such as the hardcover and paperback edition is meant to allow customers to choose between different formats, but customers should be able to expect to read the same content. Newer editions of nonfiction books generally have additional primary content, and therefore aren’t considered materially the same.

Books that are different parts of a set, or derivations of one another can’t be linked, even though they may be similar.

Thank you for contacting Author Central. We hope to see you again soon.

Double boo. I guess I should be frustrated, but pretty much everything about the old school publishing process baffles and perplexes me. Almost none of it is from a reader or author’s perspective. The publishers and distributors have their own magic language, special rules, and byzantine processes. Everything is harder than it needs to be, doesn’t work quite as expected, and has a bunch of extra words around each step.

The Mess of a Second Edition Book 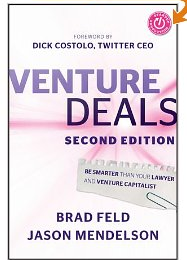 The Second Edition of Venture Deals: Be Smarter Than Your Lawyer and Venture Capitalist just started shipping. It’s new and improved, fixes a bunch of little mistakes that we listed on the Ask the VC site, and adds a chapter on Convertible Debt which builds on the posts on Ask the VC. I’m happy it’s out, but really annoyed by the mess that is created by the second edition.

Before I bash Amazon and the traditional publishing industry, I want to give Amazon some love. I bought a Kindle Paperwhite 3G a month ago. Every time a new Kindle comes out, I buy it. After struggling to like the Kindle Fire HD, which now sits dormant in my laptop bag, I am absolutely in love with the Kindle Paperwhite- it’s stunningly good for a high volume reader like me.

Ok – back to the mess of a second edition. Writing the second edition is pretty easy – you get the final Microsoft Word files from the publisher. I would have loved to fix the mistakes earlier in the ebook, but that wasn’t part of the process. So Jason and I just tossed up an Errata page on the website and pointed people at it when they found a new, or old, mistake. We wrote the new sections (the chapter on convertible debt and a few appendices), fixed some other stuff we felt could be improved, and sent it back in to the publisher.

Given the success that we’ve had in academic settings, where Venture Deals is now being used by over 100 undergraduate and graduated courses as a textbook, we also created a teaching guide. Jason and Brad Bernthal wrote this as a completely separate book which we expected would be published. Instead, it’s ends up being on Wiley’s Instructor Companion Site which I just spent 10 minutes trying to get a login for an failed (grrrr). In addition, we are now working on an Inkling edition version of it which is desynchronized from the release of the book – mostly due to miscommunication about what was required to create it.

The normal copy-edit production loop ensued that I’m now used to. Jason and Brad Bernthal submitted the teaching guide separately – the first pass of the copy-edit loop happened, but had more gear grinding as we struggled to understand what was actually going to be produced. We eventually figured it out and everyone ended up happy. Then we got the new cover designs since apparently a second edition gets a new cover design. We are going to put this into the Startup Revolution series so it’s got the little Startup Revolution logo on it.

A few weeks ago I noticed that Amazon had Venture Deals: Be Smarter Than Your Lawyer and Venture Capitalist (2nd Edition) available for pre-order. I was perplexed that it was an entirely new page on Amazon with a different ISDN number. None of the 123 reviews moved over with it and the work we put into the page for the first edition was gone. I checked with Wiley on this and quickly found out that Amazon considers 2nd Editions to be completely new books.

So – here I sit on 12/29 with a new Amazon pages for the 2nd Edition in physical and Kindle form, excitingly with zero reviews on a book that has a 4.8 of 5.0 on 123 reviews, light weight Amazon pages, and no access or links to the Instructor Companion Site. Remember, writing these books is a hobby for me, not my full time role in the world, so when I see this I immediately think “there must be a better way.”

In this case, I’m perplexed by Amazon. It seems like they should be focused on making this stuff awesome from a user perspective and and author perspective. Even if there is a new ISBN number, wouldn’t it be so much better to have Venture Deals all connected together, with all the history, made beautiful and awesome for everyone involved? Who cares that the traditional publishing industry has a new ISBN number for 2nd Editions – end users don’t really care about this. And authors who want to spend all of their time writing and as little time as possible fighting with this crap must want to blow their brains out when this happens.

Fortunately, all of this amuses me. I enjoy the people at Wiley I work with – they are working their butts off on many different fronts to be successful. They are dealing with a complex environment that is changing quickly on them. And they are working as hard as they can to stay relevant in this environment. I respect them a lot for this. But it’s still a completely mess.