Why Gateway Accelerate Is A Great Choice For International Entrepreneurs

On September 15, 2016, UMSL Accelerate joined the Global EIR network and began taking applications for its international accelerator program, Gateway Accelerate. Today is the last day to apply, so if you are considering it, don’t wait.

The goal of this program is to contribute to St. Louis’s local economy and UMSL’s curricular and non-curricular offerings to its students by attracting talented entrepreneurs from around the world to relocate their business to St. Louis. There are numerous benefits to the program including assistance with cap-exempt H-1B visas applications, enrollment in a 12-week boot camp, access to discounted office space, network development, mentorship opportunities, and access to capital.

I’m excited to have a Global EIR state besides Colorado in the middle of the country. Missouri is our fourth state to go live following Massachusetts, Colorado, and Alaska. New York has a similar program, so let’s count them as five, even though they aren’t formally part of the Global EIR coalition. We’ve got another half a dozen states in different stages of launching, so look for more soon.

St. Louis has a great startup scene and a vibrant business community. I ran a marathon there several years ago with Matt Shobe and have several long time entrepreneurial friends there like Keith Alper. There are a number of accelerators in town, including Capital Innovators, Arch Grants, SixThirty, Standia, and The Yield Lab. Business growth over the last five years has been significant and 26 Fortune 1000 companies are headquartered in St. Louis across many industries including Express Scripts, Emerson Electric, Monsanto, Ameren, Sigma Aldrich, and SunEdison.

St. Louis is a good example of a vibrant city. Having stayed in a hotel in 2011 overlooking Cardinals stadium when they won the World Series, their fans definitely show up loud and proud. As I ran the marathon, I got a sense of the city, which felt healthy and diverse. With the help of the St. Louis Mosaic project, the city aims to have the fastest growing immigrant population in the U.S. by 2020.

Gateway Accelerate is a one of a kind program where 100% of its funding comes from local companies rather than the university. I hope more cities engage with immigrant entrepreneurs the way St. Louis has – it’s a great model. 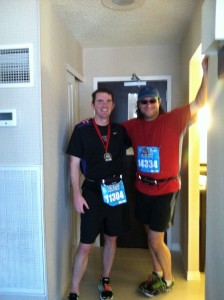 Marathon #20 is in the books. Yesterday I did the St. Louis Rock ‘n’ Roll Marathon with Matt Shobe. The amazing Amy Batchelor once again sherpa’d for us. The weather was perfect, the course was pretty but hilly, the support was outstanding (as it typical of Rock ‘n’ Roll marathons), and I came in at a solid 4:51:26.

This race was an experiment – I wanted to see if I could do a marathon two weeks in a row while living my normal life. Last weekend I did the Amica Newport Rhode Island Marathon, ran out of gas around mile 16, and struggled home in 5:13:36. Prior to that marathon I had been on the road all week and crisscrossed the country (Denver to SF to Rhode Island). Last week was another heavy travel week – Boston to NY to SF to St. Louis. I did all the normal stuff I did with two exceptions – I didn’t drink any alcohol and I was obsessive about rubbing Purell on my hands throughout the day.

When I got to St. Louis Friday night I was tired and my left shoulder hurt. I always have pre-marathon hypochondria so I figured that since I don’t run on my left shoulder, that was as good a place as any to have some pain. Amy and I had room service, I went to sleep early, slept in, went to the marathon expo, took another nap, went out to Italian dinner with Matt and Amy, and went to bed early.

At 7:30 Sunday morning Matt and I were off and running. Well – not really – it was a 20,000+ person race so it took us 15 minutes to cross the start line. I felt tight and uncomfortable the first three miles but just let the crowd carry me along. We went past the St. Louis Ballpark which is a beautiful stadium, cruised through downtown, and by mile four I was starting to settle down.

My coach – Gary Ditsch – has regularly encouraged me to eat gels during a marathon. Up until now I’ve ignored him since I don’t want to carry anything while I run. This time I bought an iFitness pouch and filled it with six gels. There were two spots on the course where they were handing out gels so I decided to have one on every prime number mile. Rather than drinking Ctyomax (which I hate) I just did gels and water this time. As is typical, the coach is right as it made an incredible difference.

Our pace was incredibly steady for the first ten miles. At mile ten, I had to take a dump so we lost about three minutes along with a few pounds. Matt patiently waited for me and then had to listen to me rant about how relieved I was. He’s such a patient person.

We cruised through the half marathon in 2:24. This was faster than we expected as we figured we were on a 5 hour pace. Neither of us was watching out split times – I had RunKeeper going on my iPhone but no audio with the idea that we’d just run.

The course was a really nice tour through St. Louis. There were tons of hills – only one particularly long, but the endless undulation of the course started to get annoying around mile 20. Or maybe it was just that we were at mile 20.

Matt was the perfect running partner. He could have easily done the race 30 or 45 minutes faster but just hung with me. We talked a little on and off, but mostly told jokes and just chilled out running together. My dark miles on this race were 14 to 20. I was a little anxious about running out of gas like I did last week, but 17 passed, then 18, then 19, and I felt fine.

At 20, we decided to run solid for the next four miles and then push the last two. This was the strategy we used when we ran the Huntsville marathon together and it was an incredibly satisfying way to finish. We cranked on the last two miles, passing hundreds of runners, and feeling great as we crossed the finish line together.

I’m incomprehensibly tired this morning. As I wrap up this point, I’m heading to the airport to head home to Boulder for a week. Yay.