Blood In The Streets 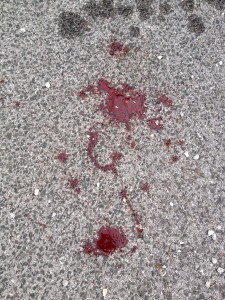 It’s never is ok to have a brain fog slowly lift and realize you are bleeding all over yourself. It’s a calm moment when you are in that state where it takes another five seconds to realize what just happened. No pain, no panic, but no understanding. Just observation. “Something just happened. I’m bleeding. What happened? Where am I?” followed by “Oh shit I just had a nasty bike crash.” A terminator style system check begins to ascertain damage when all hell breaks loose.

In my case it was a very controlled chaos. One of our guides – Marko – was whatever the Czech version of an EMT is. By the time I realized who I was and where I was, he was in my face, telling me not to move, stabilizing my head as he directed someone else to untangle the bikes from me. As the fog lifted, I felt ok, could talk, and he realized my jaw wasn’t broken. He commanded me not to move yet as he emptied his emergency kit. He looked in my eyes and made sure they responded. He asked me a few questions which I presume I answered correctly. He made me move my jaw around more. He did a scan of the rest of my body, especially my legs, and then started taping up my still bleeding chin.

By this point the fog had completely cleared and I knew what had happened. I was on vacation for a week in Slovenia celebrating my partner Seth’s 40th birthday. Seth is a huge cyclist so his wife Greeley gave him a wonderful present of a week bike trip with seven of his cycling buddies and his three partners. We were on day four of an outstanding life experience together.

Until this summer I hadn’t ridden a bike since I was in high school other than a few random times on vacations. I’d never done any serious cycling and had completely missed the cycling craze of the last decade. Six months ago Seth helped me buy a bike – I’ve been mixing it in all summer with my marathon training, discovered Strava, learned how to shift gears properly, had started to learn what gear I should be in, experienced several back to back 30 mile training rides, and started to learn about how doping worked since that seems to be the central theme of many cycling conversations right after detailed descriptions of accidents.

The rides in Slovenia were awesome. The first day was 70 km – mostly flat. I took the second day off and then had another great 70 km day – by this point I was in a groove. On day 4 we had a huge 20km 2500 climb and descent, so I decided to run the hill which ended up being just about a half marathon. I started before the cyclists and finished 15 minutes before they did.

The first crash happened about 1 km from where I was waiting. Seth got a flat tire on a steep downhill and bit it immediately. He was ok beyond bruised hip and severe road rash – he shook it off and at this point I rejoined the group and got on my bike. I started off tentatively and was in the back of the pack as everyone else took off.

In hindsight there was no way I should have gotten on the bike. The next 1.5 km was a steep downhill and as I picked up speed to 40 km / hour I thought to myself something like “wheee this is fun” as I caught up with everyone in front of me. I then noticed a bridge coming up that corresponded with a sharp left turn. At this point, I have very little recollection of what happened. I’m sure I started braking but I knew I was going too fast. My partner Ryan was directly in front of me and I was coming up on him fast – I remember him saying, in a very calm, rational voice, “what are you doing?” The next thing I remember was blood dripping from my chin.

Those that observed what happened tell me that Ryan let out a blood curdling scream, I crashed into him as I was trying to make the turn, my bike got tangled up in his, and I went over the handlebars. The visor on my bike helmet was broken, so I clearly landed on my head – probably first since my chin only needed four stitches and my jaw wasn’t broken, although a molar was.

Thankfully Ryan was fine. He broke my fall and ended up with a few scrapes but other than being shaken up by his partner attempting to mate bicycles, he was ok. I had a daydream the next day about the two of us going over the side of the bridge tangled up together which just reinforced how glad I was that I hadn’t caused him to be injured.

Marko and Ron – the leader of our tour were awesome. Marko got me cleaned up and Ron tossed me in the van and took me to a local clinic in the next town (we were several hours away from a major hospital.) The doctor saw me in 30 minutes and stitched up my face in five, charged me 52 euros, and sent us on our way. We went to our hotel where I found out there was a dentist who had an office behind the hotel. Remember – this is a tiny little town in Slovenia (Kobarid). The dentist was amazing – he had better equipment than I’ve ever seen in the US, used a laser scanner to reconstruct my tooth, printed a new tooth on a milling machine in a back room, and within an hour sent me on my way with a new tooth for a mere 250 euros. From now on, I’m doing all my elective dental work in Kobarid.

All of that was on Thursday. I’m back in NY where Amy and I are planted for the next ten days. Other than stitches, a pair of nasty road rash cuts, and bruised ribs, I’m fine. I’ll be back on the bike again – I was having a lot of fun until suddenly I wasn’t, but the memory of that moment will fade with the scars. I guess I’ll be growing that beard I’ve been avoiding for a while.