We Lead or We Participate

Over the years, I’ve been in many multi-party negotiations. I don’t know the maximum number of participants in a single negotiation, but I’m sure it’s greater than ten active negotiating parties in a transaction.

We shifted our behavior some years ago. Often, we lead deals. When we lead, we negotiate the terms. We work collaboratively with any other co-investors, but we’ll take the lead.

But, if we don’t lead, we follow. This can be tricky, as our instincts (or ego) can often get in the way since we are used to leading deals. Or, the lawyers can get confused about what our real goals and intentions are in the negotiation. We always have a few key things that we need, but these are almost always non-controversial. But they can get mixed up in the fog of a transaction, making the unimportant seem important, and the unemotional seem emotional.

I’ve grown to like the phrases “term setters” and “term accepters.” Simply put, if we lead we negotiate the terms. If we follow we accept the terms. The lawyer fees are much lower when you behave this way.

The retrades have begun. Since the beginning of the year, I’ve experienced four retrades – two early stage, one growth, and one late stage – and I’ve heard of a number of others.

If you’ve never experienced a retrade, or don’t know what I’m talking about, it’s the situation when you have a firm deal agreed upon or a term sheet signed and are proceeding to closing a deal, when the investor (or acquirer) decides to change the terms of the deal. And, in case you were wondering, it’s always to make the terms worse, not better.

This happens regularly in M&A deals especially with buyers who are buying thinly capitalized companies or ones who don’t care about their long term reputation. It’s very prevalent with buyers who over time get the reputation as bottom feeders and is often something floated during the diligence process to test the conviction of the seller.

However, for the past six years or so, I haven’t seen retrades from VCs or angels investing in companies very often. Occasionally a deal will fall apart in diligence, some famously so, but they rarely have been retraded.

This lack of retrades, however, is not the historical norm. When I started investing in the 1990s, I experienced a lot of retrades from VCs at many different stages. While a term sheet isn’t binding, part of the reason it tended to be long and complicated was to avoid the retrade dynamic and spell out all the terms of the deal explicitly.

In the late 1990s into the mid 2000s, I viewed the risk of a retrade as continuous background noise in any deal – investment or M&A. The notion of deal certainty became important to me and I started spending more time working with investors and acquirers who I believed had a very high likelihood of following through on what they said they were going to do. In contrast, once I found myself being retraded by someone, I noted it and had a higher bar for working with them going forward, since I expected there would be a future likelihood of a retrade if I did something with them.

By the late 2000s, I had stopped being emotional about the notion of a retrade. I viewed it as a normal part of business, which impacted an investor or acquirer’s long term reputation, but was woven into the fabric of things.

And then the retrades more or less stopped. From 2010 forward, the entire VC market shifted into a mode that many describe as “founder friendly.” Investor reputation mattered at both the angel and VC level. Retrades were a huge negative mark on one’s reputation and word got around. As more and more investors showed up, valuations increased, and time to close a deal shortened, there was little tolerance for a retrade, so they disappeared.

As we are now about five months into a broad market reset, both for public and private market valuations, the retrade has reappeared in private investments. The first indicator of it is that it now takes longer for a deal to close. I expect the days of transactions closing 15 days after a term sheet is signed are probably gone for a while. While some lawyers are breathing a sigh of relief, a deal that takes more than 30 days to close often starts to have a little bit of retrade risk. And, when a deal stretches out over 60 days, there’s a lot of risk around deal certainty – both retrade as well as a full deal collapse.

Recognize that I’m talking about investments, not acquisitions. I never saw the retrade dynamic go away with certain buyers and certain type of acquisitions. However, what’s notable to me on the investment side is that the retrade is happening up and down the capital stack.

VC Rights: Up, Down, And Know What The Fuck Is Going On 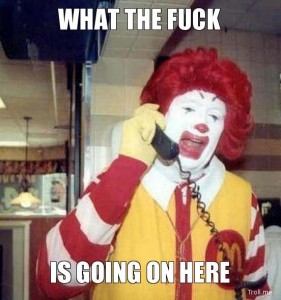 At the HBS VC Alumni event I was at last week (no – I didn’t go to HBS – I was a panelist) I heard a great line from a wise old VC who has been a VC about as long as I’ve existed on this planet.

“VCs only need three rights: Up, Down, and Know What The Fuck Is Going On”

If you’ve read Venture Deals: How To Be Smarter Than Your Lawyer and Venture Capitalist, you already know that Jason and I agree with this statement. And even though a term sheet might be four to eight pages long and the definitive documents might be 100 pages or more, other than economics, there are really only three things a VC needs in a deal.

Up: Pro-rata rights. When things are going well (up) a VC wants the ability to continue to invest money to maintain their ownership.

Down: Liquidation preference. When things don’t go well (down), a VC wants to get their money out first.

Know What The Fuck Is Going On: Board seat. Beyond demonstrating that older VCs also swear in public, many people believe that with a board seat comes great power and responsibility. In reality it mainly gives one the ability to know what’s actually going on, to the extent that anyone knows what’s actually going on in a fast moving startup.

As I was writing this up, I remembered that Fred Wilson had a post about this a while ago. I searched his blog (using Lijit and the term pro-rata) and quickly found a great post titled The Three Terms You Must Have In A Venture Investment. He attributes this to his first VC mentor, Milt Pappas, and the three terms are the same ones referenced above. It’s a great post – go read it.

Entrepreneurs – don’t get confused by the endless mumbo-jumbo. If you haven’t read Venture Deals: How To Be Smarter Than Your Lawyer and Venture Capitalist grab a copy. Or read blogs. Or do both. And VCs – don’t forget what terms you really care about – focus on making it simple.