Before we invested in MakerBot, we bought and assembled a Thing-O-Matic. When I say we, I mean me, Jason, and Ross. It took us about 20 hours (Jason and I did the first half; Jason and Ross did the second half) and was a blast – think of it as an adult lego project. Our Thing-O-Matic has been steadily printing stuff – you can play a game of chess with our Thing-O-Matic pieces. the next time you are in my office.

As part of the endless series of Amazing Deals I bring you from my deal site, today’s offer is a fully assembled Thing-O-Matic. If you want your own 3D printer, but you don’t want to assemble it, you can buy it fully assembled for $2,500. But, through the magic of daily deals, there are 20 available for a 20% discount ($2,000). This is a one time offer from my friends at MakerBot so grab ’em while they are available.

In additional TechStars Cloud launched today along with the first episode of TechStars on Bloomberg TV.

And finally, for all of you that have written asking for a “Convertible Debt Series” like our term sheet series, we’ve just started one on AsktheVC.com. The first post is up and introduces the series – we’ll be working through all of the terms in a convertible debt deal over the next few weeks. 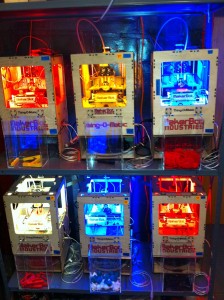 Today we announced that we’ve led a $10m round for MakerBot Industries and I’ve joined the board. I’m super excited to be working with Bre Pettis, Adam Mayer, Zach Smith, and the rest of the MakerBot gang to create consumer-grade 3D printers.

When I first met Bre, Adam, and Zach at the Botcave in Brooklyn, it was love at first sight for me. The entry way to the BotCave has a series of Thing-O-Matics (the current MakerBot 3D printer) printing out all kinds of things. A display space of 3D things sits next to a vending machine with 3D parts in it, which all open up into a warehouse space full of tiny little parts neatly arranged and being put together in kits to be shipped. At the back were a bunch of people banging away on computers.

I took a deep breath and at that moment thought “I have to invest in this company.” I spent a few hours with Bre, Adam, and Zach and came away even more excited. I knew I had a massive nerd crush on them, but I also felt like if anyone was going to create a self-replicating machine that my father would buy, these were the guys. It’s well known by now that I believe the machines have already taken over – investing in MakerBot seems like another way to help them out.

Fortunately my partners loved the MakerBot gang as much as I did. But, rather than just theorize, I bought a MakerBot Thing-O-Matic and Jason, Ross, and I put it together. It’s been busy printing out all kinds of things for the past few months. The day we signed the term sheet, I made some Foundry Group coins (with the Foundry Group logo on the front and a $ on the back) and fedexed them to Bre. I wonder what he’ll make and send back to me now that we are investors.

I believe that we’ll look back in 20 years and 3D printers will be as ubiquitous as laser printers are today. We aren’t yet at the point that is equivalent to the first HP Laserjet in 1984, but I think we’ll see a comparable product from MakerBot within a year. In the mean time, I’m going to keep downloading 3D things from the Thingiverse and keeping my Thing-O-Matic busy.