The current usage of the word unicorn makes me tired. I could rant about it for a while, but that would make me tired of myself ranting about it.

Instead, I’d like to focus on a word that appeared a month ago by Aileen Lee in Welcome To The Unicorn Club, 2015: Learning From Billion-Dollar Companies. That word is unicorpse. 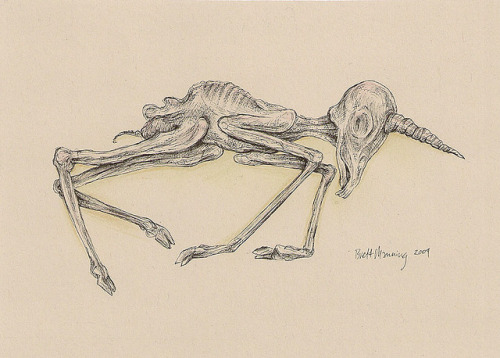 “Given how much capital our private companies have raised in the past few years, most likely have cash to fund 2-4+ more years of runway.  If private capital is no longer available in the future, these companies will seek a public offering or acquisition. Some will demonstrate strategically justifiable metrics and have fantastic ‘up round’ exits; others may see liquidation preferences kick in which will negatively impact founders and employees; others may fulfill the adage “IPO is the new down round”, which has been the case for more than half of the public companies on our list. Or worse, some may become “Unicorpses” :)).”

The word showed up again in Nick Bilton’s Vanity Fair article Is Silicon Valley in Another Bubble . . . and What Could Burst It?

“Indeed, contrary to Kupor’s argument at the Rosewood, it is this later-stage investing—with its shortage of regulation, tremendous envy, and Schadenfreude—that worries many bubble-watchers. “We basically doubled the number of unicorns in the past year and a half,” says Aileen Lee, the founder of Cowboy Ventures, who has herself become a mythic creature in the Valley after coining the term. “But a lot of these are paper unicorns, so their valuations may not be real for a while.” Others, Lee acknowledged, may never see their balance sheets add enough zeros to justify the title. They will be given a new sobriquet: “unicorpse.””

Yesterday, Erin Griffith had a perfect chance to use unicorpse in her article VCs have ‘Dying Unicorn’ lists, but they aren’t sharing them but she missed the layup and went with dying unicorn instead.

“But amid all the unicorns getting their horns, investors have warned of “dead unicorns.” In March, investor Bill Gurley made headlines with his pronouncement that “a complete absence of fear” would lead to dead unicorns this year. Venture capitalist Marc Andreessen warned in a tweetstorm that startups with high burn rates would “vaporize.” Last week Salesforce CEO Marc Benioff also predicted dead unicorns as startups seem to focus more on their valuations than their customers.”

Now, I don’t blame Aileen for the word unicorn. And I credit her for unicorpse, which I expect will be a lot more prevalent in the future. It’s not, in Bilton’s language, schadenfreude on my part. Instead, I believe that by focusing on the concept of a unicorn, we are paying attention to exactly the wrong thing.

Don’t feel bad for me. I once was on the board of a company that had generated lifetime revenue of $1.5m and was acquired by a public company for $280m of stock which, by the time the deal closed, was worth around $1.1 billion. Two years later, the public company (which at one point was worth over $30b) was bankrupt.

None of these companies were ultimately worth $1 billion or more. Each of them stumbled for different reasons, but a lack of obsessive focus on product and customer was a big part of why they vaporized. They assumed, regardless of how much capital they had, that they could raise more. They didn’t focus on building a long term, sustainable business that had a huge protective moat around it. I don’t care how disruptive you are – if you don’t build a moat, someone is going to come disrupt you.

Let me say it a different way.

There is nothing special or magical about $1 billion valuation. It’s just a number.

I’m not predicting a bubble or anything else. I’m not negative about where we are at in the cycle. I hope to live another 50 years as I think this is going to be the most interesting point in the history of our species up to this point.

But I do think it’d be useful for more founders and investors to ponder unicorpses and spend less of their energy talking about, and trying to become, unicorns, lest you one day find yourself a pile of dusty bones.