Confidence restored. After a shitty marathon #16 in Cincinnati a month ago (5:24) I cranked out marathon #17 in Madison in 4:47:27. I dedicate this particular effort to my co-runner TA McCann and my sherpas Amy Batchelor and Jessica Schallock. 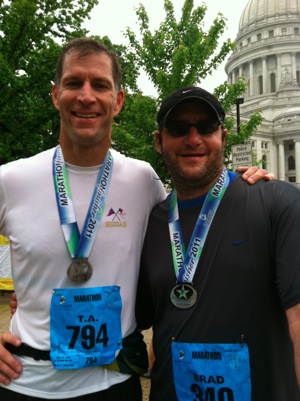 For the first 20 miles the weather was perfect. Cloudy and 60-ish. TA lived in Madison for several summers in college when he was a mega-swimming stud so he kept me entertained with tails of training for five hours a day, every day, in a pool, over and over again – which made running a marathon seem relatively straightforward.

The first five miles were beautiful as we ran through the Arboretum. It’s a great way to start a city race – quiet, mellow, and loads of oxygen everywhere. There were only 1600 marathoners to they spread out quickly and TA and I felt like we were on a nice long run with water stops every mile or two. We went through the half at 2:20 and it occurred to me that we were halfway done and I was feeling better than most other marathons. I didn’t really notice our time again until when I looked at my watch at 3:12. By 20 miles it was pretty clear that we had 5 hours beaten and 4:45 was in striking distance.

The rain started at mile 20. So did the bicycles – there was a long stretch along Lake Monona on a running / bike path which was the only frustrating part of the race. Usually during a marathon the running / bike paths are closed to cyclists; this time they weren’t. And the rain just made it a total mess. So for about three miles we just hammered on, cold, wet, and mildly annoyed by the bikes.

At about mile 23 the 4:45 pace guy passed us once and for all. Now we were on the hunt for 4:50 which ended up being no problem. As we ran the last mile up a nasty hill to the Capitol we were both out of gas, but the end was in sight so like every good marathoner we just ground it out.

I’m now confident that I can do a marathon every four weeks. I wonder if I can do one every other week.