Richard Florida continues to write amazing stuff about Startup Communities in The Atlantic Online. Two of his latest articles talk about entrepreneurial density and venture capital.

For a long time I’ve suggested that an interesting measure of entrepreneurial density would be ((entrepreneurs + employees of startups) / total population). I asserted in my book Startup Communities: Building an Entrepreneurial Ecosystem in Your City that I thought Boulder had the highest entrepreneurial density in the world. I qualified this by staying I had no real empirical data – it was merely an assertion based on my experience. 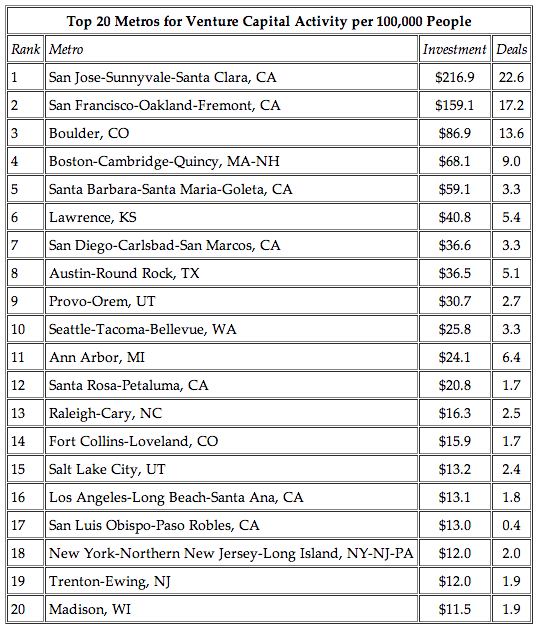 The comments are fascinating and generally miss the point. One in particular, called Richard unethical, although it was from “WithheldName” (also known as Anonymous Coward).

“It’s totally unfair to make Boulder separate from Denver. Combine Boulder and Denver. It’s called the Denver-Boulder Metropolitan Statistical Area for a reason. Was Cambridge separated from Boston? Of course not. The author was from Boulder. This data was slanted to Boulder. It was totally unethical.”

This particular person doesn’t understand that Boulder and Denver are separate startup communities. In contrast, Cambridge and Boston are one startup community, consisting of six startup neighborhoods (three in Cambridge, three in Boston, all within a 15 minute drive of each other, even in traffic.)

More importantly, the author of the article wasn’t from Boulder. I’m from Boulder. I didn’t write the article – Richard did. And – he was pretty clear about all of that, so our friend needs to rethink his definition of the word “unethical.”

That said, the more interesting study is by zip code, not by city or MSA. Mixing MSAs and cities creates a comparison that isn’t precise. And Richard acknowledges this:

“I’ll continue to track the evolving geography of start-ups and venture capital in future posts. Next week, I’ll look at the economic, demographic and social characteristics of metros that are associated with venture capital and start-up activity. In future posts, I’ll delve more deeply into all of this, using detailed data by area code and zip code level to tease out the changing geography of venture capital and start-up activity and its distribution across cities and suburban areas.”