My Sunday morning online scan of the New York Times turned up an awesome Op-Ed by Frank Rich titled It’s the Economic Stupidity, Stupid.  It’s a scathing (er – "fucking brutal") criticism of McCain and his total lack of understanding of "the economy", how it actually works, and what he would do about it were he to be president. 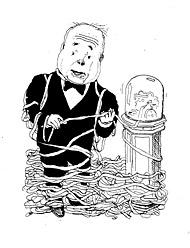 While Rich takes a few cheap shots (hey – it wouldn’t be a political Op-Ed without some gratuitous things) I think it’s right on the money.

At the end, Rich makes a good argument for Michael Bloomberg as the VP Candidate.  He also dismantles Carly Fiorina as a potential VP and suggests Romney would be a slightly less bad idea.  I can’t imagine either Fiorina or Romney as VP’s – my mind just boggles.  Bloomberg – now that’s someone I could get excited about – for EITHER party.  I hope the dude is at least answering his phone when it rings.

But the real message of the Op-Ed is how out to lunch McCain is on the economy.  Taken at face value, it’s terrifying.  Of course, it’s an Op-Ed so you can’t take it at face value, but it’s politics so that’s what you get.

Time to go for a run and think about birds, the ocean, and happy thoughts.  I’ll drink some Pixie Maté first to fuel me while giving thanks to my latest 50 by 50 Marathon sponsor.