For the last three years I’ve been laboring to help propagate the myth that it doesn’t snow much in Boulder and when it does it’s 55 degrees the next day and the snow all goes away.  After getting back from a week of vacation on the beach in Mexico on Friday and now being on day five of the thermometer hovering around zero, tons of very frozen snow on the ground, and no chance that I’m going to contemplate heading outside for a run, I’ve decided to call bullshit on myself.

It snows here. Plenty.  It’s a really fun snow.  Beautiful, overwhelming storms that roll in, dump a foot, or two, or even three. (the record at my house – 48 inches). 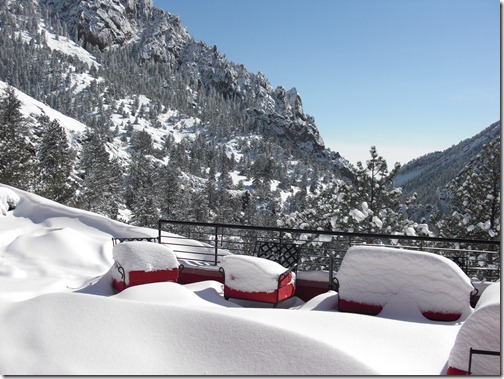 Sometimes it’s really cold, but it’s a “dry cold”, it’s not windy, and it you wear the right number of layers, a hat, and gloves it’s actually kind of fun.  Some crazy people (ahem – moi) even like to go for a trail run while it’s snowing, as long as it’s not zero degrees outside.  For example, the view from my house yesterday morning after I left my car running for a while to warm up. 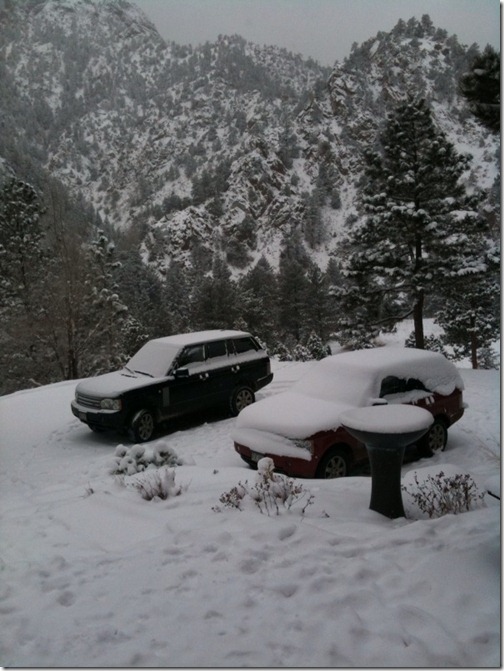 It does eventually warm up and get very, very sunny.  Then all the snow and ice goes away, unless you live near Mapleton, in which case you are screwed for a while, or in Eldorado Canyon, where you actually prefer the snow and ice doesn’t go away so people have a harder time coming to visit you.

The snow usually starts in December, although a mid-October snowstorm of a foot or more isn’t unusual.  But that early one is just a tease since it goes away in 24 hours when it’s 55 degrees.  The December one sticks around for a while because of the temperature.  And the angle of the sun.  And the next storm that comes before it all melts.  On the bright side, it usually means the ski slopes are getting hammered also.

It’s only really cold in December and January.  Well, sometimes February.  And occasionally March.  And then it really snows just to make sure spring skiing is awesome.  But by now it is actually getting warm on a regular basis so the snow comes and goes.  And it’s no big deal, unless you live near Mapleton.

From 1997 to 2005 there really was very little snow here in the winter.  The people that have been living here for 30+ years tell me that’s because there was a major drought going on.  When I moved her in the winter of 1995, I experienced two years like the past three.  But 1997 to 2005 dimmed my memory, along with all the talk about global warming.  Well – apparently the drought is over.

I’m really fucking cold this morning (-8) although my weather app tells me it’ll get up to 20 degrees today.  Oh goody.