Remote Board Attendance Via Skype 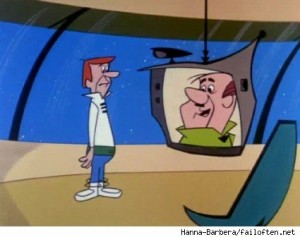 I’ve been on a number of board calls this month while I’ve been in Paris. About half of them have been via Skype; the other half have been standard audio conferencing. I’ve also had a bunch of other meetings, discussions, and pitches via Skype.

The quality of the meeting and interaction – when all attendees are in person or via videoconference (in my case Skype on my laptop) – was 10x better than the ones via audio conference only.

In several of the meetings, we simply set up Skype on a laptop and put the laptop at the end of the table. It’s a simple, low cost (free) solution, that works awesomely well. In one case, there was more than one person on Skype. Rather than try to do a Skype three-way (which works well also), the company simply set up two laptops with a separate Skype session on each. Skype audio seemed to work just fine in all cases but one, so we did an audio conference for voice and Skype for video.

While there will always be adhoc conference calls on short notice for boards that need to ratify something, for any meeting over an hour, or any scheduled meeting, putting the effort into getting everyone either physically there or on video makes a huge difference.

I know it sounds trite, but it’s remarkable how much better – even in a one on one conversation – the discussion is when it’s video instead of just audio. The calls are higher impact, body language is apparent, and people pay full attention rather than “minimally acceptable attention + email”.

We’ve been waiting for and talking about video conferencing for a long time. I think it’s really ready this time.