PBS Newshour has a neat eight minute segment on accelerators. TechStars is featured, along with several others. This makes me happy as part of our goal when we started TechStars was to “open-source” the mentor driven accelerator process. It’s been awesome to be part of this incredible (and – in my opinion – incredibly important phenomenon).

The punch line from the interview is in the first 30 seconds.

I really wish every member of Congress would read this over and over and over again. Whenever I see stuff like Protect IP and SOPA making progress through Congress (both bills – which if passed – will have a chilling effect on entrepreneurship and job creation) I get frustrated. It’s easy (but incorrect and uniformed) for people in Washington to dismiss accelerators, and entrepreneurship, as a small part of our economy. But when there’s as much focus as there is on creating jobs, it seems like our friends in Washington should be turning everything else upside down to be supportive of activities that create jobs, especially when the job creators (e.g. entrepreneurial companies) aren’t asking them for anything. And remember that these are only direct jobs – think of all the indirect jobs that get created by the payrolls, wealth, and taxes generated by these entrepreneurs.

If you don’t understand what an accelerator is, or just want a nice eight minute overview, watch this video. And repeat to yourself “startups create about 3 million new jobs a year.”

Near the end, Vivek Wadhwa makes the comment that “other countries like India and China are learning our secret sauce. They are learning what made America what it is.” I’d add Europe to that – following is a picture of me talking to a group of entrepreneurs in Copenhagen this moving via Skype as part of Startup Bootcamp, a TechStars Network partner with accelerator programs in Copenhagen, Dublin, and Madrid. This is a worldwide phenomenon – and it’s awesome. 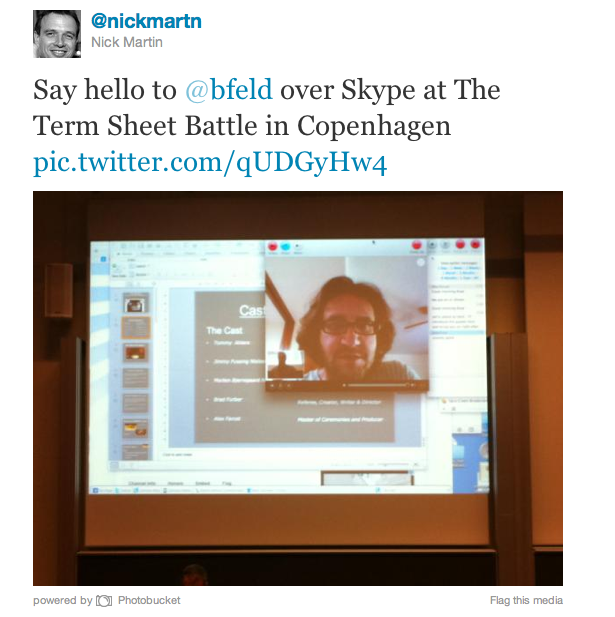