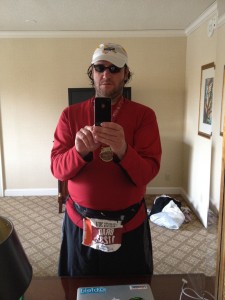 When I got to Philadelphia on Friday I was tired and mopey, as evidenced by the post I wrote on Saturday titled The Last Marathon of the Year. When I talked to Amy she gave me some encouragement and told me that I’d get it done no matter what. Nonetheless I just felt flat and listless. My partner Ryan and his wife Katherine joined me for dinner Saturday night (Katherine ran the marathon also) and we had a nice Italian dinner at a local place called Giorgio on Pine. The food was tasty but the vibe was off and the service was slow so we sat around and worried about the race.

I woke up Sunday morning feeling good. The hotel (I stayed at the Four Seasons near the start) did an awesome thing I’d never seen before – they had a special breakfast for marathoners consisting of oatmeal, toast, a banana, a bagel with cream cheese, coffee, and a gatorade. I gobbled everything down but the cream cheese, met Katherine in the lobby 30 minutes before the start, and walked to the starting line.

The marathon and the half marathon had 27,000 runners, which is a ton of people. I made my way back to the second to last corral (where the 5 hour runners hang out) and settled in to wait for the start. They did wave starts so I didn’t cross the start line until about 7:25 (the marathon started at 7:00).

The weather was perfect. Cool but not cold, almost no wind, and a light cloud cover so it was light but not sunny. I had decided to run without any time queues so while I had RunKeeper broadcasting my race live, I had turned off all the audio notifications. This was the first time that I’ve run a marathon without knowing my pace at every mile split. So – I just ran.

As with all marathons, the first three miles were uncomfortable as I settled into a rhythm. We were pretty clogged up so there was a lot of dodging people, but things eventually settled down. I missed a mile marker somewhere and was at mile six before I realized it. I felt great so decided to run a little harder from mile six to the half marathon point. I didn’t overdo it, but kept a solid pace. I passed a surprising number of people (remember – I started in the back at a 5 hour pace) so I knew I was solidly ahead of a 5 hour marathon.

I went through the half way point feeling great. As I turned a corner, I saw finishers coming my direction. This turned out to be inspiring – from mile 14 to mile 16 I ran opposite the faster runners. I just zoned out, watched them, and picked up my pace. At mile 16 I was still feeling good and passing people so I kept cruising. I had no idea what my actual pace was, but I knew I was doing 10 minute miles since they had clocks at each mile and each time I passed one the minute ended in a six (e.g. 3:16:21).

I finally hit the wall at mile 21. I knew it would eventually happen – I literally felt my legs downshift. I went through that mile at about 11:30 and decided I’d just cruise at this pace until the end. But at mile 23 I got a second wind, could smell the finish line, and picked it up again. By mile 25 I was running as hard as I could – I’m sure my form was hilarious, but I continued to pass people as I headed for the finish.

When I crossed the finish line I pulled my iPhone out of my pocket and ended the run. I saw 4:29:02 on my phone and was completely surprised – I had no idea I was under 4:30:00.