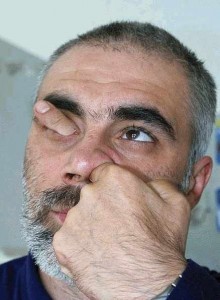 Indulge me while I think out loud. I’m trying to decide if I like the phrase “poke people in the eye with the truth” or not. Help me by reacting to the following rant – good, bad, bullshit – and feel free to poke me in the eye with truth if you’ve got some, just give me a hug at the end.

One of the people I was talking to said “that’s all well and good, but I’m not comfortable telling my fill-in-the-blank-with-a-government-title person this stuff. I’m concerned they won’t respond positively to this. I strongly agree with you on what your saying, however. How should I approach this.”

I responded that “sometimes you just have to poke people in the eye with truth.” Be blunt. Be direct. Be firm. Don’t be an asshole – just say it like you see it. And if they think that makes you an asshole, that’s their loss. And when you are done, give them a hug so they know you care and are trying to be constructive.

I carried that line around with me for a week. I observed myself (which is deliciously meta) poking people in the eye with truth and then giving them a hug. My animal spirit, according to Amy when she’s in an earthy crunchy woowoo moment, is a giant polar bear. I like to think of this as the warm, cuddly, lovable version of a bear – the one that won’t crush you when it hugs you. Somehow these two thoughts merged together in my head and continue to circle around.

I’m at Venture Capital in the Rockies today. This is our annual Colorado VC / entrepreneur thingy. Last night I had dinner with a bunch of entrepreneurs who didn’t have dinner plans. It was last minute and a lot of fun. At the end of the dinner we got into a great conversation about the state of the local VC community and I was characteristically blunt about what I thought had happened, was going on now, and would go on in the future. While I have no idea if I’m right about the future, I made the strong assertion that it doesn’t actually really matter that much given the incredible underlying startup community and incredible entrepreneurial talent in the region.

While on the surface there’s plenty of political correctness about this conversation, and lots of “we need more VC money”, which I’m sure will be echoing in the hallways at VCIR today, I realized that I was once again simply asserting my belief that this didn’t really matter. At dinner, I wasn’t poking any VCs in the eye with the truth since there weren’t any there, but if they had been, I’m sure that’s how they would have felt I was behaving. It probably wouldn’t have been comfortable, but if they’d been willing to respond and challenge my assertions, it would have been a robust conversation.

I’ve got plenty of other examples of this from the last week, but you get the gist of this. Is “poke people in the eye with truth” a good phrase, or just nonsense?