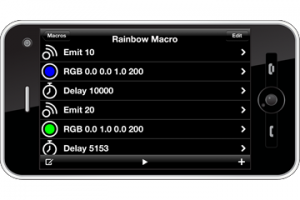 Last week President Obama played with a Sphero. This weekend you can win up to $5,000 at the Sphero Hackathon in Boulder. It starts Friday May 4th at 6pm with a Welcome Reception (which means beer and Spheros) and runs all day Saturday and Sunday where you can hack with Spheros and the Orbotix SDK. I’ll be around Sunday from 1pm to 3pm taking a look at what people have done, playing around with the apps, and answering any questions about why I think Sphero (and Orbotix – the company that makes Sphero) is so awesome.

Two new apps have recently come out for the Sphero. The first, Chromo, allows you to play with Sphero in a whole new way. While Orbotix’s other apps allow you to control Sphero from your device (kinetically and via a digital joystick), now Sphero is the controller. The video tells the story better than words.

The other app is MacroLab. Did you have a Big Trak as a kid? If not, you missed out, but you can relive those missed moments with MacroLab. As before, let’s start with a quick video.

MacroLab is a tool Orbotix developed for internal purposes that turned out to be so powerful they decided to make it available to all Sphero users. It is essentially a high level abstraction of the API that runs in the ball’s memory that commands the robot. It makes the API accessible to people who don’t know how to program an iOS or Android app.

When a user creates a macro they send a series of commands to the ball. Macros are made by stringing together 27 basic commands (by comparison the SDK has about 300 commands – most are UI/robot housekeeping based but 100 are ball control related). Each command is executed in sequence. Following is an example (called “test”) along with an explanation.

– Calibrate – this zeros out Sphero’s heading so you know which way he will go after you aim him
– RGB – this changes the color of the LED to purple – the numbers are the RGB settings
– Roll 0.5 0 0 – 50% speed (0.5), 0º heading = straight ahead, 0 second wait time before executing next command

If we stopped here the LED will flash purple and Sphero would run away at 50% speed and only stop when you exit the macro. Basically the macro runs for a fraction of a second with an open ended roll command. The Sphero goes white (his default color) after the macro is run. In order to not have an open ended command we need to add some more stuff.

The entire macro runs for 6 seconds. Sphero will turn purple, drive for 5 seconds at 50% speed, stop, turn orange for one second and then end by turning white.

The commands for MacroLab are very basic but powerful enough that Orbotix uses them to run tests on the factory line and form the basis of programs like “Draw N Drive” (every line you draw gets converted to a macro and the ball executes the command). The complete command list follows:

When I first heard the idea for MacroLab I smiled a huge smile. It’s the beginning of Orbotix opening up their robot control language, which is part of the magic behind the premise for our investment in Orbotix. I’m amused when people say “why did you invest in a toy ball company?” when what we really invested in was a bunch of geniuses working on a robotic operating system that happens to start life out as a robot ball that you control with your smartphone.

What are you waiting for? Buy a Sphero today and get started. And come to the Sphero Hackathon in Boulder this weekend.