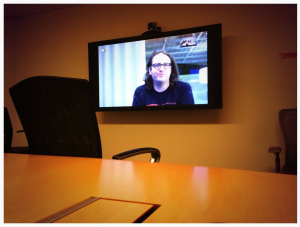 I’m doing a one hour CEO roundtable on an “about weekly basis” with each of the Techstars classes. Yesterday I did a face to face with the Techstars Boulder CEOs (they are across the hall from my office) and then I did my meetings with the Techstars Chicago CEOs and the Kaplan EdTech Accelerator CEOs by video conference.

This is a new experiment for me. I’m trying a different approach to mentoring the Techstars teams this year. I’m still a lead mentor for two of the Boulder teams (Kato and SnowShoe) but for all the other programs, including Boulder, I’m trying a weekly one hour CEO only session.

One of my big goals is to generate more peer interaction between the CEOs of the various companies. We do this aggressively within the Foundry Group portfolio and it’s one of the really powerful things about Techstars. But historically it’s been adhoc and random, rather than in an organized way. This is an effort to get the CEOs to really bond with every one of the other CEOs during the program.

So far the experiment is working great from my perspective. I’m stunned by the depth of the conversation and I can see the relationship dynamics being very broad as well as intellectually and emotionally intense.

By week 4, a team is deep in things. The stress is showing. Everyone is tired and working at their max capacity. They’ve been exposed to a wide range of mentors and lots of conflicting data. Stuff is breaking all the time. Everything is uncomfortable and – in some cases – distressing.

In reaction to a particular conversation, I strung together quotes from three of my favorite books about entrepreneurship. The rant went as follows:

I used the quotes as the anchors on a longer rant, but I did it extemporaneously. I hadn’t realized how nicely these quotes fit together until this particular moment, prompted by the particular situation. In hindsight, the only quote I forgot was my favorite of all time – “Do or do not, there is no try.” – Yoda.

And – it reminded me that three books should be on every Startup CEO’s reading list along with Matt Blumberg’s new book, Startup CEO.