Running From Aspen to Basalt

I’m running my 25th marathon in South Dakota on 10/8/17. My training has been going well and I’m now in a zone of 30+ miles a week with a long run once a week in the high teens.

Today’s run from Aspen to Basalt was the best run I’ve had in over a year. 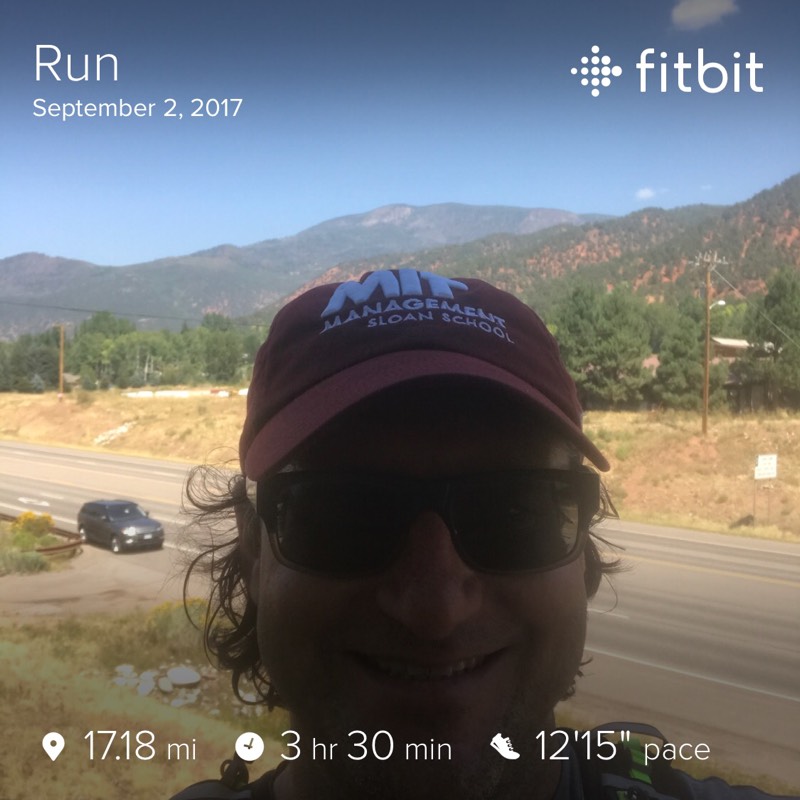 Just under a year ago, I did this same run in 4 hours. So, I’m in significantly better shape, which makes me happy since my October 2016 Marathon in Portland, Oregon was a debacle.

A three and a half hour run gives my brain plenty of roaming around time. I like to run naked (no headphones, no music) so the thoughts just drift around. My friend Matt Bencke was in my head a lot on this run. Houston and Hurricane Harvey floated around. The red mountains that I was surrounded by frequently caught my attention. I said hello to a bunch of cyclists and a few horses. Random company stuff made its way to the surface. I noticed lots of crawling bugs and scurrying animals. A bunch of jets flew overhead delivering people to Aspen for the weekend. I thought of Amy a lot.

On a run like this, I need more than two water bottles. I’ve been trying different running backpacks and finally found one I like – the Nathan VaporAir Race Vest. Yup – I’ve got a pile of others (from Camelback, Osprey, and Patagonia) all collecting dust in various closets. The Nathan VaporAir is a keeper.

In the photo above you can see Amy, in her Range Rover, waiting patiently for me at the end of my run (just after the bridge that crosses over 82.) She’s an amazing sherpa for my running, always bringing me a clean shirt, stuff to eat and drink, and transportation back to wherever I started. We went and got a pizza at New York Pizza in El Jebel before heading home. We’re on the couch watching Nadal vs. Mayer, Amy is knitting, and I’m typing.

Today is a day to treasure. Just like all of them, no matter what is going on.