One of the magic special things I remember about MIT is what happens during January. It’s called IAP – Independent Activities Period. Rather than classes, students can do whatever they want, including go home and sleep for the month (which I did a few times). There are lots of events, seminars, and short courses (day, week, month) on campus covering a wide variety of topics.

I decided to spend two weeks of IAP at MIT this year. I rented a hotel room in Cambridge near Kendall Square and tossed out a bunch of “hey – I’m going to be around – anything for me to do?” type emails. I got a little back – much less than I expected – and when I started looking through the online IAP directory I was disappointed in what I saw. But I decided to go anyway and arrived last Thursday after CES.

I’m doing a couple of things – the main being mentoring at StartLabs, a one month program for undergrads starting up companies. So far it’s been really cool – I’ve spent time with all of the companies and am focusing on two of them – Thingdom and Muse Analytical. Thingdom is up – go friend me, play around, and tell them (and/or me) what you think. Muse Analytical is still in product design mode (miniature, portable, chemical analysis) and crossing the gap between tech and product vision is fun. All of the teams in the program (seven of them) are hanging out at RedStar, the offices created by two of my frat brothers – Joe Chung and Jeet Singh. The energy is awesome.

I’m also hanging around the MIT Entrepreneurship Center a little (spent some time there Friday and Monday) and am on a panel for Joe Hadzima’s “Nuts and Bolts of Business Plans” seminar on 1/25 (where I’ll likely say something like “business plans are useless – just go read Eric Ries’ The Lean Startup and build some shit.”

In the mean time, I’ve decamped to New York for a few days where I’m hanging out with my friends at USV and my dad talking about how to transform healthcare via software and the Internet (not a huge interest of mine, but of them, and my dad) and then spending time with MakerBot creating machines that create machines.

I’m having fun on my “travel different – spend a big chunk of time in one place” efforts so far, although the intensity is pegged at 10 all the time right now which is clearly not sustainable. And I miss Amy, although she’ll be here soon (note to Amy – bring a warm coat.)

On Saturday, I spent the day with my MIT fraternity (the Lambda Phi Chapter of Alpha Delta Phi) at the Microsoft NERD facility in Cambridge next to MIT.  We did a full day entrepreneurial retreat called “ADPrentice 2010.”  This is the second time we’ve done this – the last time was ADPrentice 2005.

My frat at MIT has spawned numerous startups that I’ve written about in the past, including my post on 351 Massachusetts Avenue (home of the first office for my first company – Feld Technologies).  I’m extremely proud of the legacy of entrepreneurship from MIT’s ADP chapter and am happy to continue to play a role in helping encourage it. 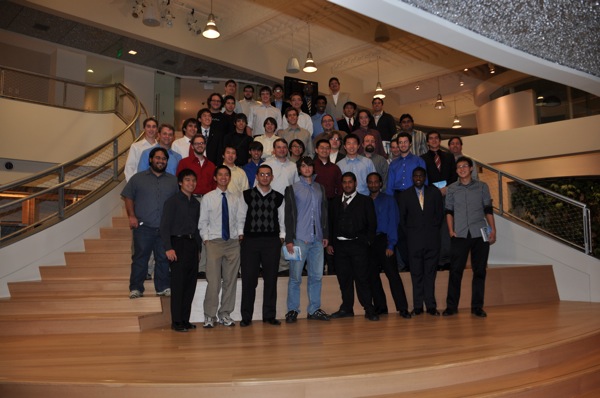 Alex Moore, the founder/CEO of Baydin (a TechStars Boston 2009 company that was recently funded by Dave McClure as a result of a taxi ride) was the ringleader along with a few other alums and undergraduates who all did an amazing job with the day.

Once again, I was blown away by the intensity and intelligence of the MIT undergrads that I spent the day with.  It’s hard to believe I was one of them a mere 25 years ago.  At some point Mark leaned over to me and said “I don’t think we could have gotten into MIT if we applied today.”  While he was being cute (Mark and Sameer are both off the charts brilliant), the message was a powerful and inspiring one as the current generation of MIT undergrads are incredible.

In 2005, I wrote a post titled ADPrentice that talked about a weekend event I did with a number of the undergraduates in my MIT fraternity (ADP).  In the post I described the entrepreneurship education event I helped put on with Sameer Gandhi (Accel Partners – then at Sequoia Capital) and Mark Siegel (Menlo Ventures).  It was an awesome weekend – we held an event modeled after the Apprentice TV show (without the bad hair) that had three challenges: (1) Marketing, (2) Hiring / Interview, and (3) 5-Year Plan & Budget.  In between events, Mark gave a talk titled “How Does Venture Capital Work”, Sameer gave a talk titled “Business Plan 101”, and I gave a talk titled “Do You Have The Balls To Start A Company?”

A few months ago I wrote a post titled Startups at 351 Massachusetts Avenue in Cambridge, MA detailing the rich history of startups from ADP that happened around the time I was living there.  After some back and forth, a handful of folks decided to mobilize another ADPrentice event for the undergraduates living in the house.  Mark, Sameer, and I have committed to participate again and we’ are trying to rope in a few of the other successful MIT ADP entrepreneurs from over the years.

In the mean time Alex Moore, the founder of Baydin (TechStars Boston 2009) who also lived at ADP (although much more recently) sent me a list of the various companies that have come out of folks that were at the ADPrentice event.  Not surprisingly, it blew my mind!

These are the active companies.  Two others were started that didn’t succeed, but that’s part of the entrepreneurial cycle!  It’s just awesome to see the outcome of something like this – it reminds me how powerful spending time with college kids is.  They are clearly the future – and we want more of them to be entrepreneurs.  Congrats to all of you – you make me proud to know you.

Scott Kirsner had a fun article in Boston.com today titled The Red Line Tour of Innovation in Boston. Several of the stops were regularly hang outs of mine between 1983 and 1995 most notably #10 (Miracle of Science) and #11 (Toscanini’s) but also including #5 (MIT Media Lab), #6 (Muddy Charles Pub), #7 (MIT Lobby 7), and #8 (Central Square and the Necco Factory – back when they made Necco wafers.)

I lived at ADP at 351 Massachusetts Avenue for four years as an undergraduate at MIT.  It was the first frat I went to when the freshman picnic ended (Mark Dodson grabbed me, shoved me in a white van, and said “you are coming with me.”)  I stayed the first night and never left.  Yes – it was a fraternity.

But we were also nerds.  There was something in the water and a lot of companies were created.  Scott got a few of them such as Colin Angle of iRobot, Jeet Singh and Joe Chung of ATG, and Frank van Mierlo of Bluefin Robotics, but I thought I’d add a few more.  While the founders of Harmonix (the guys that brought us Rock Band and Guitar Hero) came from the Media Lab, one of them (Eran Egozy) also lived at ADP.  As did my first business partner Dave Jilk, who is now CEO of Standing Cloud.  And two of the founders of Oblong – John Underkoffler and Kevin Parent.  Let’s not forget two well known VCs – Sameer Gandhi (Accel) and Mark Siegel (Menlo).  Oh – and Carl Dietrich’s flying car from Terrafugia.  We also lived next door (WILG – 355 Mass Ave) to some other impressive entrepreneurs including Megan Smith (Google and PlanetOut).  There have been plenty of others through the years – these are just the ones I can remember off the top of my head.  If you should be on the ADP entrepreneur list, please comment on this blog and add your name for posterity (and Google searches).

My first company (Feld Technologies) used 351 Massachusetts Avenue, Cambridge, MA  02139 as my office address for the first few years of its life (I officially started the company as a sophomore, although my partner Dave Jilk joined me shortly after I got my undergraduate degree.)  But Feld Technologies wasn’t the first company I started at 351 Massachusetts Avenue – that honor went to Martingale Software and my partners Dave Jilk, Sameer Gandhi, Andy Mina, and Jeff Pierick.  We raised $10k, bought a Lisa and a Compaq luggable, earned about $7k, and eventually folded the company and sent the $7k back to our investors.

During the four years I lived there and the two years I had an office at 875 Main Street, I ate an enormous amount of ice cream at Toscanini’s. To this day, Cocoa Pudding with chocolate fudge syrup on top rates as the best ice cream choice I’ve ever had on planet Earth.

One fall, after Feld Technologies had moved to Boston, we hired a recent graduate from Brown named Jonathan Lutes.  While interviewing him I asked what he had done over the summer.  He mumbled something like “screwed around a lot and built a bar called Miracle of Science with my brother Eric.”  Yup – same bar – this was 1990-ish – and it was at 321 Massachusetts Avenue.

Sometimes I actually miss the smell of Necco wafers in the morning.  It smells like ADP.