Sometimes You Have To Roll A Hard Six

Techstars is rolling out a short video program with some of the entrepreneurs and mentors favorite quotes. I recorded a few of them recently – my first one is up.

I’m a huge Battlestar Galactica fan and think Commander William Adama has amazing leadership lessons for any entrepreneur. If you don’t know what “rolling the hard six” is, it’s a classic example of a high risk / high reward scenario. Per Urban Dictionary:

“Rolling a hard six has a probability of about 3% whereas rolling six by any other combination has about a 14% chance. A hard six pays 7 to 1 whereas a regular six pays only 7 to 6”

My imitation of Adama is pretty lame however.

Can You Fall In Love With Your Computer?

I’ve been thinking a lot about human – computer love recently given my obsession with Battlestar Galactica. It evolved from “can Cylons have feelings?” to “can Cylons and humans love each other?” to “what changes when Cylons become mortal?”

So – when I saw the trailer for Her, I thought – yup – this is our future, and we’d better start getting our minds around it.

I look forward to Siri starting to sound like Samantha.

The Awesomeness of Battlestar Galactica 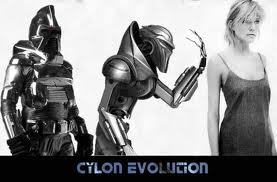 I was totally fried and fighting off a cold yesterday so I decided to spend my digital sabbath on the couch watching Season 1 of Battlestar Galactica. I took a short break at lunch time to try to induce a diabetic coma while gorging on pancakes at Snooze (which necessitated me skipping dinner and going to bed at 7pm, which resulted in me being wide awake at 11pm, hence the blog post at 200am on Sunday morning.)

While mildly ironic that I would spend digital sabbath watching Battlestar Galactica, it was deeply awesome. I have no idea how I missed the re-imagining of the series in 2003. I vaguely remember seeing the original in junior high school around the time everyone was obsessed with Star Wars. But it didn’t make a deep impression on me and my brain tossed it in the storage bin of “other sci-fi stuff.”

Season 1 from 2003 was stunningly good. The mix of low-brow CGI, complex religious metaphors, classical government / military conflict, scary prescient singularity creatures (the evolved Cylons) who are masterful at manipulating the humans, and rich characters made this a joyful way to spend a day relaxing.

I’ve got Season 2 ahead of me but rather than binge watch it like I did today, I think I’ll space it out a little. And – no more five pancake lunches at Snooze. Egads.