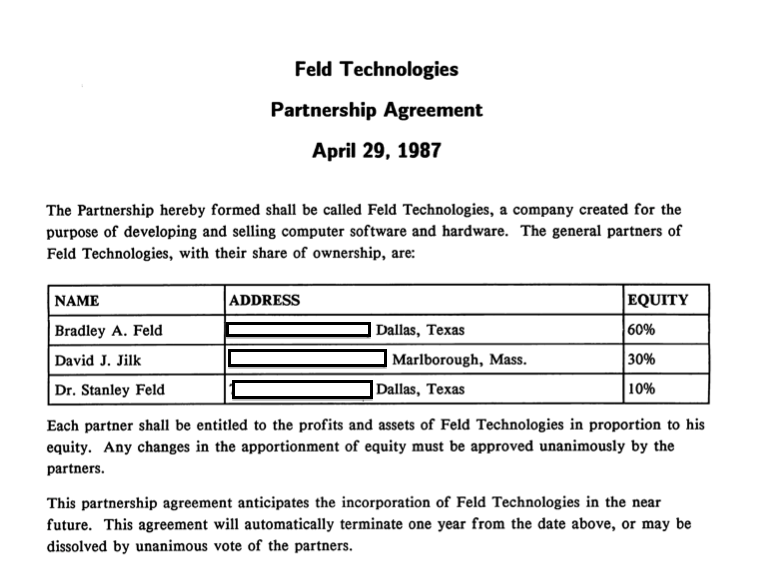 We incorporated a month later as an S-Corp. It cost us $99 to do this – I remember using an organization called The Company Corporation – we called an 800 number, gave them some information, and the documents were automatically generated and filed. A short letter agreement specifying the equity splits and the boilerplate legal docs were the only legal docs we had until we sold the company in 1993.

As my partner Jason Mendelson told me after I sent him this the other day, “If things go well, it’s fine. If they don’t, it’s a fucking disaster.”  And he’s completely correct – in this case things went well so there were no issues.

I continue to try to do deals this way. I lay out the terms, will negotiate a little, but am clear about what I want. If it works, great. If it doesn’t, I move on. Once the simple terms are agreed to, I let the lawyers generate hundreds of pages of documentation to support the deal. I used to read every word on every page myself (I learned that from Len Fassler, who bought Feld Technologies). I still look through the documents, but I only work with lawyers who I deeply trust to do it right (like Mike Platt at Cooley) so I focus on the stuff that matters for the specific deal.

Trust matters more than anything else to me in a deal. Sure, I occasionally get screwed in a deal, but never more than once by the same person. And, for people like Dave Jilk and my dad, I’ll work with them over and over and over again because I trust them with my life.

Keep it simple. It’s much better.