Something New Is Fucked Up In My World Every Day 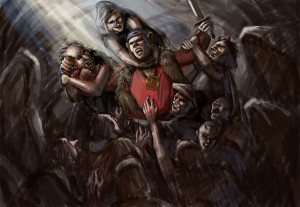 This is one of my favorite lines to use to explain the business life I live. When asked what it’s like to be a partner in a VC firm, be on a bunch of boards, and have a continuous stream of random interaction come my way, I like to level set my reality.

It’s simple. Something new is fucked up in my world every day.

Now, just because something new is fucked up, doesn’t mean I’m unhappy. Quite the opposite – I’m usually happy, although when the pile of fuckedupness gets high enough I get tired. And day after day after day of 12+ hour days also make me tired. I used to be able to work through the weekends – now at 49 years old I need them to recover, get patched up by Amy, and get ready to go back out there.

Jerry Colonna at Reboot.io tells a wonderful story about the crucible of leadership on Fred Wilson’s blog with a section titled Eat Me If You Wish (read the whole post but the parable is about half way through.) It’s worth repeating here. Take your time reading it.

“One day,” begins a story re-told by Aura Glaser in the latest issue of Tricycle Magazine, “[the Buddhist saint] Milarepa left his cave to gather firewood, and when he returned he found that his cave had been taken over by demons. There were demons everywhere! His first thought upon seeing them was, ‘I have got to get rid of them!’ He lunges toward them, chasing after them, trying forcefully to get them out of his cave. But the demons are completely unfazed. In fact, the more he chases them, the more comfortable and settled-in they seem to be. Realizing that his efforts to run them out have failed miserably, Milarepa opts for a new approach and decides to teach them the dharma.

“If chasing them out won’t work, then maybe hearing the teachings will change their minds and get them to go. So he takes his seat and begins… After a while he looks around and realizes all the demons are still there…At this point Milarepa lets out a deep breath of surrender, knowing now that these demons will not be manipulated into leaving and that maybe he has something to learn from them. He looks deeply into the eyes of each demon and bows, saying, ‘It looks like we’re going to be here together. I open myself to whatever you have to teach me.’

“In that moment all the demons but one disappear. One huge and especially fierce demon, with flaring nostrils and dripping fangs, is still there. So Milarepa lets go even further. Stepping over to the largest demon, he offers himself completely, holding nothing back. ‘Eat me if you wish.’ He places his head in the demon’s mouth, and at that moment the largest demon bows low and dissolves into space.”

I put my head in a demon’s mouth every single day. Often, it’s a different, or new, demon. Sometimes it takes me a few days to get ready for this so the demons back up. Other days two or three new demons appear and I can only deal with one of them so the others hang around.

I learned how to deal with this in 2001. That year started out miserable with companies I was involved failing all around me. I did everything I knew how to do to help. I’d go to bed at the end of the day thinking, “Ok, that totally sucked, but tomorrow will be better.” It wasn’t – each day was worse. By about June I realized that every single day of 2001 had been worse than the previous day. I finally metaphorically threw up my hands and internally said, “Fuck it, let’s see what the world can bring on today.” That’s when I started to sit with the demons.

Up to that point, I was fearful of what the day would bring. I would fight against it. I would thrash around looking to solve every problem, chasing the demons around my cave trying to get them to leave. And then 9/11 happened, on a beautiful morning in New York, while I was fast asleep in a hotel room in midtown Manhatten at The Benjamin Hotel after taking a redeye from San Francisco. As the planes crashed into the World Trade Center towers, Amy frantically called me from the road as she was driving to the airport to come visit me in New York. I had turned off my phone so I expect I snored happily away as the first tower fell. When I finally woke up I to whatever station the clock radio was on, I thought it was all a joke. For about a minute, I struggled through the post redeye haze that enveloped me, along with the existential fatigue I was feeling from nine months of companies failing everywhere, people being angry, unhappy, depressed, stressed, scared, and under immense pressure, and then I realized it wasn’t a dream.

When I finally woke up enough to turn on my phone and call Amy, I was lucky enough to get through. She pulled over to the side of the road and cried. She was sure I had been on one of the planes that had crashed. After a few minutes, we realized a trip to NY was silly so she turned around and went home. I then took a shower and tried to process what was going on and figure out what to do next.

There’s a lot more from that day that shaped me, like it shaped so many others, but suddenly many of my demons just disappeared and went to torture other people. I realized that as fucked up as my world was, it was trivial compared to what was going on 60 blocks away. While I was terrified and trapped in The Benjamin for a while, I had at least four hours before I took action to just sit and process things.

Dealing with the particular set of demons in my cave at this point to another three months. That period was my second of three clinic depressions that ended around my birthday on December 1st. I spent these three months sitting with all of my demons, welcoming more into my world, and just learning from them.

When the really scary ones showed up, I didn’t fight. I just placed my head gently in each of the scary demons’ mouthes and said “eat me if you wish.”

Just like with Milarepa, it worked. And it’s now how I live every day.