Be In Love With Your Business

Amy and I spent the last week in Tuscany with some friends, including Howard Lindzon. Howard is the CEO of StockTwits, a company we’ve been an investor in for a few years. I was an investor in Howard’s previous company WallStrip, met Howard through an introduction from our mutual friend Fred Wilson (it’s a pretty funny story, as are many things with Howard), and have worked closely together on a bunch of things including TechStars where Howard has been a great mentor and investor since the beginning. 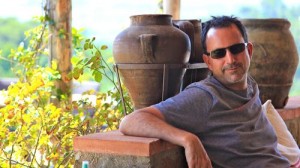 We had an incredibly wonderful week last week and Amy has a great post up on her blog titled Our Revels. If you know Howard, you know he’s an always on, mostly hilarious, sometimes crazy (like a fox), super high energy except when on ambien guy. After four days of Tuscany, Howard was completely chilled out and more relaxed than I’ve ever seen him.

But don’t let this totally chilled out Howard fool you. He was on his computer a lot. Whenever I looked over at him, he was on the Stocktwits web site communicating with the stock community he’s helped create and loves. As the market was gyrating around he tweeted up a storm, put up a bunch of content on StockTwits, did some trades in his hedge fund, and wrote a few insightful (and funny) blog posts about the market including his discovery that the Tuscany VIX is always less than 10.

Howard loves Stocktwits. He loves his business. He loves stocks. He loves the community of people that care about stocks. And he’s creating a company – a really interesting and important one – around his passion. It’s wonderful, infectious, fascinating, exciting, and awesome. And yes, today is adjective day.

While Foundry Group generally avoids investing in vertical markets, we make an exception for our Distribution theme. One of the key attributes of this theme is that the company must be led by an entrepreneur who is completely obsessed with a vertical market. They must be thinking – every single waking moment – about how they are going to change the way the world interacts with the vertical market they are attacking.

Howard defines this type of entrepreneur. It was incredibly inspiring to be around. We had a blast doing non-Stocktwits / non-stock stuff, but when he was working he knew exactly what he was going to work on.

We have either recently closed (but not announced) or are about to close several other investments with entrepreneurs who have similar characteristics. None of them are in our Distribution theme, which is pretty cool, as the entrepreneurs are completely obsessed with the problem their business is addressing.

When an entrepreneur is trying to decide between a couple of different ideas, I often ask the question “which one are you in love with?” If there’s a quick response, then the answer is easy. If the answer is none of them, that’s the answer to which one he should pursue.

Howard reminded me of this again last week. Thanks Howard.

We’ve put up a post on the Foundry Group site about a new theme of ours we are calling Distribution. We’ve been investing in this theme for a while but have continued to formulate exactly how we think about it.

I’ve talked about our thematic approach to investing many times in the past.  Every now and then it feels like it’s worth a quick post on our current themes. They are:

Human Computer Interaction: The way humans interact with computers 20 years from now will make the way we interact with them today look silly. Sample companies include Oblong, Organic Motion, and Fitbit.

Glue: Computers love to talk to one another. The amount of “computer to computer interaction” is increasing at a dramatic rate. There’s a software layer that “glues” this together. Sample companies including Gnip and Standing Cloud.

Digital Life: We believe that people own their digital assets and should be able to access them anytime from anywhere. Sample companies include Cloud Engines and Memeo.

Protocol: Many protocols – both formal and informal ones – support extensive software ecosystems. We’ve been investing in protocols like SMTP, RSS, XML, and SMS for years and expect to continue doing this. Sample companies include SendGrid and Urban Airship.

We’ve got one additional theme that we’ll be talking about shortly. We’ve decided to split our Glue theme into two different themes as we’ve realized a particular pattern in our investment dynamics around this theme. Look for another post on this shortly.

Fun and Games with BigDoor

We recently invested in a Seattle company called BigDoor Media.  The founder/CEO Keith Smith wrote a wonderful love story about the deal which was picked up by the WSJ VC Dispatch in a post titled A Summer Romance Between Founder And Venture Capitalist.  Yes, I’ve fallen in love (in a very non-sexual way) with Keith, his co-founder Jeff Malek, and BigDoor.

Over the past year I’ve become increasingly obsessed with the idea that the computers are going to take over.  I’ve even begun to think that we are already working for them. So – why not have fun while we are at it?  By using a light weight API approach, BigDoor enables any non-game publisher to quickly integrate game mechanics such as points, badges, levels, leaderboards, virtual currency, and virtual goods into their web and mobile applications.  They’ve already rolled out integrations with Cheezburger Networks and BuddyTV and have a pile of additional publishers launching in the next 90 days.

BigDoor straddles our Glue and Distribution themes.  While Glue may be familiar to you, Distribution is a new theme that we’ll be talking about soon when we re-segment Glue into a couple of new themes to more clearly delineate what we’ve been investing in over the past two years.

I’ve already been spending plenty of time in Seattle due to Gist, Impinj, TechStars Seattle, and some other good friends that I have there.  In fact, according to Daytum, I’ve spent 14 nights there in the past eighteen months.  I expect I’ll be spending plenty more there soon, including a few next week on my way to Alaska.

If you are a web publisher, take a look at what BigDoor can do for you.  And, while you are at it, check out Lijit if you haven’t already incorporated the slickest publisher search on the planet – now with an ad network and a fresh $6m – into your site.