Last week, in the midst of Denver Startup Week, we had a full day Foundry Group Exec conference. Ben Deda from FullContact convened about 100 execs from our 60 or so portfolio companies for the day. We had seven topics of one hour each, led by a different set of execs. The result was an incredible range of discussions across an amazing group of people.

One of the attendees was Jeff Malek, the CTO of  BigDoor. Jeff is super passionate about what he does and mixes humor with intensity with math. Following is something from Jeff to kick you in the ass this morning and get you charged up.


Last year I put together a slide deck for what the FAAAC was all about.  Amongst other things, it describes a start-upper’s most valuable core attributes: fire, ability, agility, adaptability, and clear, concise communication skills. 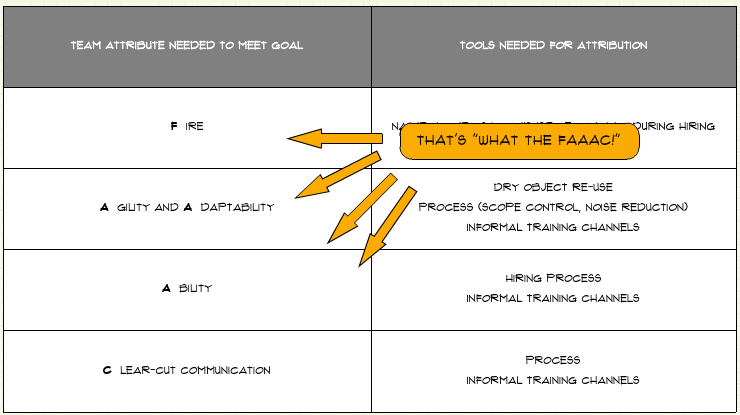 A couple of months later FAKEGRIMLOCK published his incendiary work BE ON FIRE.  As I read this wonderful post, I got very positively charged up. I thought : what the FAAAC is up there, with FAKEGRIMLOCK?  Yes, it seemed to me: it is totally up there with FAKEGRIMLOCK!

Was I somehow channeling the King of Awesome? Could I be some sort of supernatural vessel, carrying the same caliber of limbic wisdom as the great, giant robot dinosaur?  After asking around, the consensus was “probably not”.  Someone even mentioned that I might be confusing “vessel” with “vassal”.

Still, I felt compelled to reach out to Brad  and pointed out this cosmic parallel.  Brad asked if I’d like to write a guest post.  I thought, “hmmm…lucky FAAAC opportunity…” and began a mental draft immediately, in tandem with other P0 efforts I had in the works at the time (e.g. sharding our database systems).

One year and fourteen pounds of irony later, I’ve completed my assertion of reasonable ridiculosity for the FAAAC.

Behold, the Fire in the FAAAC Proportionality Theorem:

Which can be read per line thusly:

It may seem like I’m just pointing at the clear connecting lines between myself, Brad , Edison, and FAKEGRIMLOCK.  Fishing lines, maybe even.

But seriously, we have a rigorous process at our startup that tests new job candidates for these traits, making it easy to determine whether they should be leveled-up to the next interview stage.   It involves running through our sprint process on a compressed timeline, working with a hypothetical customer, in a typical solution space.  After 30 minutes a ruleset is produced in English, and supporting code is produced within an hour.  The whole point is to determine whether the candidate is someone we could work with, and whether they have fire, agility, adaptability, ability, and good communication.   I don’t care if someone can figure out why manhole covers are round.  I want to know how well they’re going to perform in the context of our team, and our business.  The best candidates rock these qualities out, just like the most successful entrepreneurs I’ve met do the same.