Tag: for here or to go

Seattle Screenings of For Here or To Go?

Amy and I have been big supporters of a movie about immigration called For Here or To Go?

With our friends at Boundless, we are sponsoring a week of screenings in Seattle. We are supplying a bunch of free tickets and – when they are used up – will still have a set of paid tickets available.

It’s playing at the Landmark Theaters Crest Cinema Center from Friday 9/22 to Wednesday 9/27. If the topic of immigration is important to you, this is a great, powerful, thought-provoking movie.

If you want to bring a big group or spend some time with Rishi, the creator of the movie, just email me.

Boulder Screening of For Here or To Go

Amy and I are executive producers of the movie “For Here or To Go?” We’ve decided to fund the screening of it in Boulder. It will be showing at

It will be showing at The Boedecker Theater at The Dairy Center for the Arts on May 28th at 4:30pm. Tickets are only $11 and are limited. They’ll sell out quickly so sign up now. We will be there – we hope to see you also! 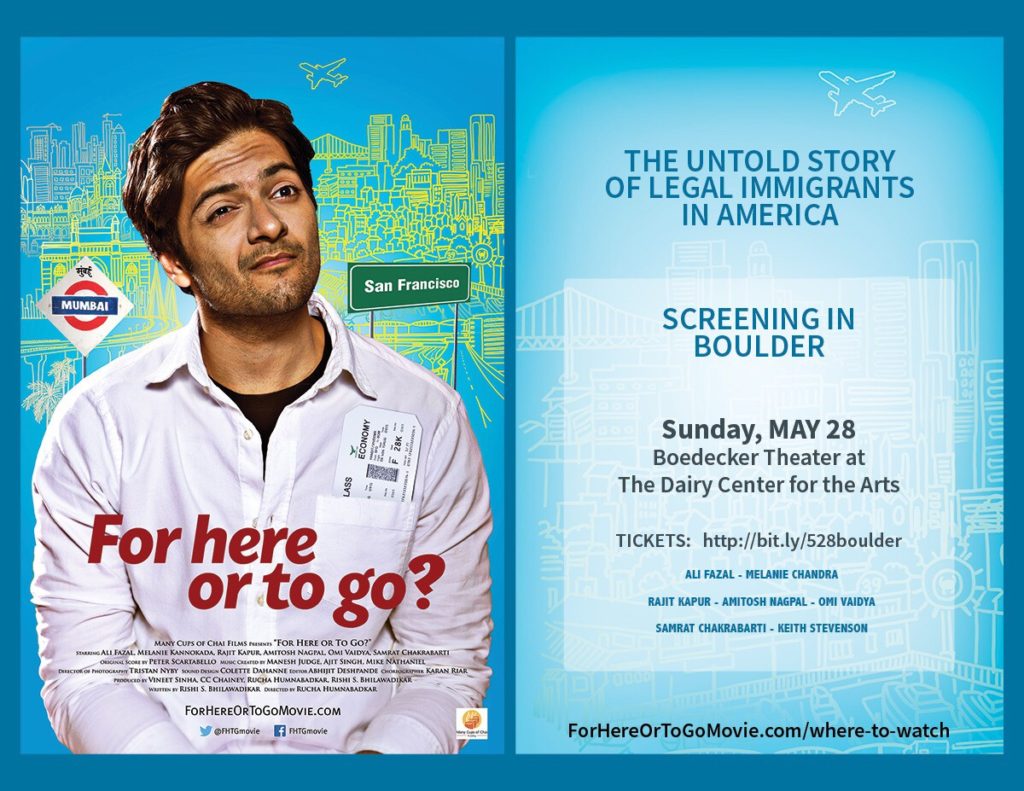 The overview of the movie follows:

Set against the backdrop of the 2008 recession, For Here or To Go? is a comedy drama about the many personal battles faced by immigrants living in America. Young Silicon Valley software professional Vivek Pandit is poised to become a key hire at a promising healthcare startup, but when they realize his work visa has less than a year remaining, the offer disappears. Having learned the hard way about the flaws in his “it’s just paperwork” mentality, Vivek battles forces beyond his control to get his visa extended, whether at his existing company or a new job. Just as the prospect of returning home to India starts to look tempting, Vivek meets a girl worth the fight to keep the life he has built in America. Along the way, his eyes are opened to the similar struggles of his own roommates – other immigrants equally seen as “temporary workers” in the United States, who drive nice cars but avoid investing in furniture for fear of having to leave it all behind. American in mind and Indian at heart, this is a contemporary story of ambition and ambivalence fueled by one’s immigration status that characterizes the dilemma of modern cultural displacement. (Rucha Humnabadkar, 2017, USA/India, 1:45, NR)

Immigration Fundraiser: For Here or To Go

A little over a year ago I wrote a post about a feature film Amy and I were helping fund called For Here or To Go. The movie is about a set of Indian software developers in the US on H1-B visas. The main character wanted to start a company, or join a startup, but couldn’t make either happen in the context of the current H1-B visa constraints.

It felt relevant when we helped fund it. It seems even more relevant today. It’s an excellent movie and my punch line from the blog post a year ago was:

“Now, this wasn’t a dry movie. While I don’t know Indian culture very well, Rishi created a rich set of characters, interwoven storylines, and a powerful content – including the challenge of romantic relationships while having an uncertain future around one’s immigration status – that drew me in to the movie.”

For Here or To Go is now finished and will be out at the end of March. Amy and I committed to match up to $25,000 of a $55,000 fundraising campaign to help get wider distribution for move. If this is something you are willing to participate in, go to the Crowdrise page and give whatever amount you are willing, knowing that Amy and I are matching you dollar for dollar.