The Venture Deals Online Course for this spring starts this Sunday May 14, 2017 and runs through July 3, 2017.  The Kauffman Fellows Academy and Techstars are co-hosting the course. It’s free – all you need to do is sign up.

This is the fifth time we are running the course. So far more than 5,000 people around the globe have done it and we’ve gotten to meet and collaborate with entrepreneurs from six continents.

While our book Venture Deals: Be Smarter Than Your Lawyer and Venture Capitalist is the basis for the course, we have extensive exercises, additional content, and a highly engaged community to answer questions. Jason and I make regular visits, both in the online discussion sections as well as periodic AMAs. In addition, the team from Techstars is also engaging throughout the program.

If you are interested in entrepreneurship and how startup deals work, here’s a great chance to go deep on this with me, Jason, Kauffman Fellows, and Techstars.

Getting the Most Out of Your Board of Directors

When I wrote Startup Boards: Getting the Most Out of Your Board of Directors with Mahendra Ramsinghani, our goal was to help entrepreneurs understand how to create an excellent board of directors, manage it effectively, and get optimal value out of it. This was challenging to do, as the topic of boards can be boring. Based on the feedback we’ve gotten, including consistently positive reviews on Amazon, I feel like we accomplished that goal.

Last year the Kauffman Foundation, with which I’ve had a long relationship and am a big supporter of, approached me about doing a Kauffman Founders School video series on Startup Boards. We completed it early this year – the teaser follows.

There are seven modules that are each five to ten minutes long.

Each module also has suggested additional readings, beyond our book Startup Boards.

I’m proud to be part of the Kauffman Founders School, which includes some great courses such as the ones listed below by folks like Dan Pink, Steve Blank, Bill Reichert, and Meg Cadoux Hirshberg. 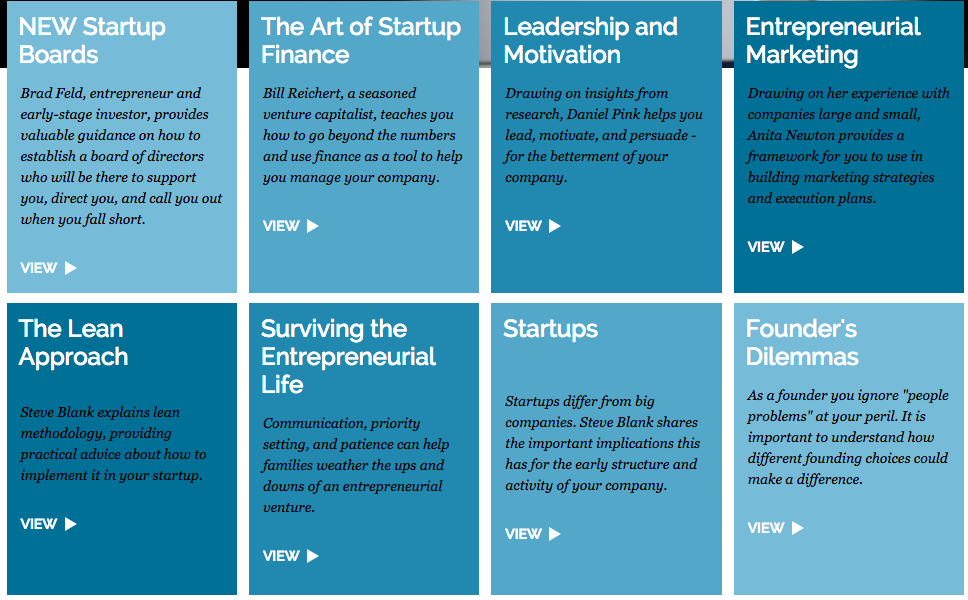 I just finished up at Thinc Iowa and am heading to San Francisco for a few meetings tomorrow. I had an awesome time in the last 24 hours, especially last night hanging out for three hours with 20 or so  entrepreneurs at StartupCity in Des Moines.

I started my talk off today by showing a video that the Kauffman Foundation just did for Startup Communities. It’s part of the Kauffman Sketchbook series which I completely love. I think it does a fantastic job of explaining the Boulder Thesis, which is the framework that I use in Startup Communities for how to create a vibrant and sustainable entrepreneurial ecosystem.

If you haven’t seen the Kauffman Sketchbook series, go check out some of the other videos. My favorite is from Paul Kedrosky about raising capital titled Money Game. It follows.

Working On, Rather Than In, Your Business

I spent the day yesterday in Kansas City at the Kauffman Foundation with about 20 women entrepreneurs who were the E&Y Winning Women from 2008, 2009, and 2010. As part of their program, Paul Kedrosky and I spent the morning talking to them about accelerating their growth, dynamics around financings, and boards – mostly about how to build a board and use it effectively. It was a great day – awesome energy with stimulating discussions. In addition to a great discussion, I learned a lot in my continuous quest to better understand dynamics around gender in entrepreneurship. I also met some amazing women.

On Monday, I had a meeting with a CEO of a company I’m an investor in who was frustrated with his role in the business. He had grown bored and restless with a lot of the work he was responsible for and felt like much of what he was doing was a grind that wasn’t inspiring to him. At the event yesterday, I heard from several of the entrepreneurs that they were stuck at a certain size (one at $22m, one at $5m) where day to day activities in the business consumed all of their time. As with the CEO I spoke with on Monday, I heard frustration about the daily grind and a lack of enjoyment and stimulation from the business.

I remember this feeling very clearly from my days running my first business. At about 20 people / $2m in revenue I got very bored. I was very busy, so it wasn’t lack of things to do, I just found the things I was doing to be excruciating dull since I’d been doing them for a while (at least five years). At the time, I struggled with how to address this; we ultimately ended up being acquired before I really felt like I figured it out.

During our discussion yesterday, one of the entrepreneurs brought up the notion of “Working on your business, instead of just in your business.” I heard this line many years ago but had forgotten it. It hit me right between the eyes as something that captured the conversation that I’d had with the entrepreneur on Monday and was exactly the correct notion to summarize the way to address the boredom of the endless business grind.

My friend Matt Blumberg at Return Path has really mastered this. He writes about it a lot on his blog Only Once (in fact, his blog is a tool for him to explore the issues that a first time CEO faces, since you are only a first time CEO once.) But it’s reflected in the impressive business that he and his team have created. Tim Miller at Rally Software is another entrepreneur that I have immense respect for and when I think about how he spends his time, much of it is working on the business. These guys have both scaled from CEO of a raw startup with a few people to CEO’s of 250+ employee companies, while moving through their own personal evolution while the businesses growth and thrive.

In the discussion yesterday, I kept thinking that a CEO’s need to spend more time working “on the company”, not “in the company.” Of course, there are loads of tasks in the company a CEO has to do. But having the balance shift all the way to never spending any time on the company is a huge mistake. Plus, it leads to the inevitable grind that I once found so unsatisfying.

To all the women I spent the day with yesterday – thanks for exposing me to your stories and spending your time with me so I could think through this more.

The Kauffman Foundation just announced that they are providing 15 scholarships to Defrag. If you are an entrepreneur running a startup that is pre-Series A funding, you are eligible for a scholarship.  Kauffman will cover the full cost of the conference pass – all you have to do is get to the conference and find a place to sleep.

I’m hugely appreciative that Kauffman has stepped up to do this.  Conferences are not cheap and it’s a big expense for a company that has no funding.  On the other hand, it’s an incredible networking and learning opportunity for a startup that’s addressing issues in the ecosystem that Defrag covers.  Paul Kedrosky had a big hand in this and has been super helpful to Eric Norlin at Defrag from the beginning – thanks Paul – you are a star.

If you are interested in applying for one of these scholarships, just email Eric Norlin (enorlin AT mac.com) with your name, company website, and a 100 word (no more) explanation of why you should be at Defrag.