Empty Out Your Junk Drawer 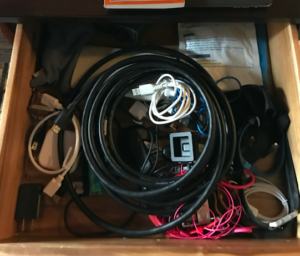 Everyone has a junk drawer. Or two. Or ten. One of mine is to the left.

So does every company. It’s now often referred to as “Labs” (as an homage to the infamous Google Labs which was disbanded in 2011.)

We’ve seen a lot of companies spin up a Labs as a way to try to create new products. In most cases, after about a year, it’s a junk drawer of random shit.

At a Techstars meeting on Monday, in response to something I said, Jason Seats blurted out “that’s just putting it in the junk drawer.” I love when Seats does that – it makes me stop and think. And, in this case he was absolutely right – it was a lot better to simply delete the thought that I’d had (and the activity around it) then to put it in the junk drawer.

I’ve come to really hate the concept of “Labs.” Fortunately, most of the companies I’m involved with who have done a Labs thing have shut it down and reabsorbed it back into the product organization in a more systematic way.

At some point, I realized that Labs was either (a) a random place to put a founder who is no longer working on the core activity of the business or (b) a place to work on a set of things that product can’t make progress on. Both of these are foundational issues.

If (a) random place for a founder, the CEO may not be dealing with an organizational issue around a founder. Or the founder may not be tuned in to how to work with a now scaling organization. There are situations where you want a founder (or founders) to go work on a new R&D project, and it could be called Labs, but it should be focused on a particular product initiative, not a non-defined grab-bag of randomness. When I think of the success cases here (and I have a few), it’s really “new product R&D” rather than “labs”, even when the new product isn’t clearly defined yet. But that leads to (b).

If (b) a place to work on a set of things that product can’t make progress on, this usually appears when the CEO (and potentially a founder) are frustrated with the pace of new product development. This is a recurring theme in my world when a company hits around $5 million of revenue on their first product. It happens at multiple points again in the future and is a good example of the differences between starting a company and scaling a company. It’s easy to blame this on the product organization, but it’s often more complicated than that. Sometimes it’s a single executive; often times it’s the way the engineering and operations organizations (including customer support) interact. And sometimes it’s the CEOs lack of understanding of how to run a maturing / scaling product line while adding in new products.

In either case, the default to creating Labs as a solution to a problem is not a good one. And, when I get home from CES, I’m going to throw all the shit in my junk drawer away.