Dave Jilk, my partner in Feld Technologies, recently dug up a bunch of old stuff. I blogged one of the documents recently – The Simple Formal Beginnings Of Feld Technologies – and have a few other fun ones coming.

Today, let’s look at another example of a contract that we signed in the context of “keeping it simple.” Over the seven years we were in business, we used a very simple form we referred to as a “Professional Services Agreement.” This was the document that we signed with almost all of our clients. Every now and then we had to deal with something more complicated, but even large companies typically were willing to sign this agreement in 1990. 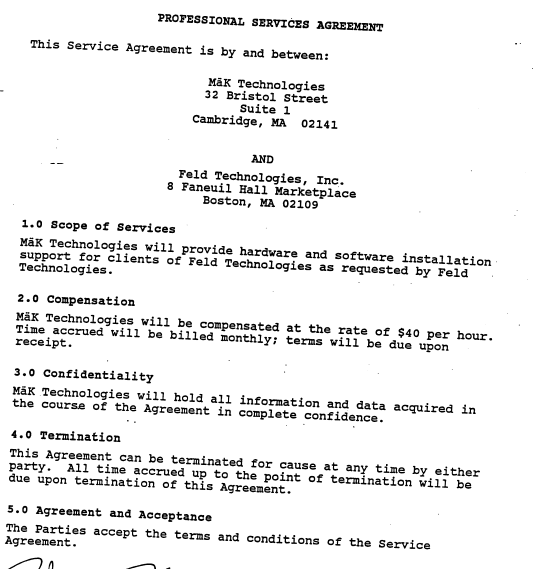 Over the life of Feld Technologies, we were never sued. We had our share of difficult client situations and were fired a few times, but were always direct and straightforward in how we dealt with stuff. We tried to always keep it at a business level and have a personal relationship with our clients so that when projects got into a difficult place, we could get together and work them out directly. And even when the answer was to part ways, we were always graceful about it.

The PSA shown above is our standard, but listing us as the client and MaK Technologies as the vendor. I believe it’s the first piece of business for MaK Technologies, a company co-founded by my long time and close friend Warren Katz. Dave and I met Warren through his wife Ilana, who was the employee #7 at Feld Technologies.

One of our clients was Monitor Company, at the time a young but very rapidly growing consulting firm in Cambridge. They used a bunch of Sun Workstations for all of their presentations (this was in the time of Harvard Graphics – well before the ubiquity of PowerPoint – which was completely inadequate for what they did). Instead, they used the Sun’s and Interleaf running on Unix. While we had a lot of hardware and networking expertise, we didn’t do anything with Unix (we were all about DOS and Novell Netware) so we subcontracted Warren’s company to help us with the Unix stuff at Monitor.

Warren and I have done many things together – some that have worked and some that haven’t. Twenty-two years later we still do business with a handshake. Warren has a great chapter about this in Do More Faster. Remember – keep it simple.