The Center For American Entrepreneurship

While there are lots of non-profits supporting entrepreneurship, CAE is organized around the idea of engaging and educating policymakers in Washington and at state and local levels across the nation, regarding the critical importance of entrepreneurs and startups to innovation.

I met the John Dearie founder and CEO of CAE, a year ago. He came to Boulder, met with me for lunch, and gave me a copy of his book Where The Jobs Are, which I promptly read and felt was on the money. I knew a number of people on the board of CAE, which was just getting started, and Amy and I made a quick financial contribution to the organization.

I then watched over the past year as John, as a founder, put CAE together. I helped where I could and watched John live the entrepreneurial life as he founded a new organization. Several of our conversations were self-reflective, especially around the challenges of getting investors attention to provide seed financing for a new organization.

Ultimately John was successful and CAE has launched. Instead of a board role, I’ve agreed to be on the Advisory Council, as I’m trying to fit into a role of having an impact by helping the CEOs of the non-profits I’m involved in, rather than having a broad governing role that being a member of the board entails.

If you want to get connected to CAE or are in the DC area and want to engage around the issues of entrepreneurs and innovation, email me and I’ll connect you with John. If you want to support CAE, please consider making a donation.

Yesterday Hillary Clinton announced her Initiative on Technology & Innovation at Galvanize in Denver. I skimmed it quickly and was pleased with how substantive it was. I pondered what Trump’s equivalent would be and decided it is likely to be a tweet that says “Technology loves me.” Fred Wilson had a more constructive suggestion this morning, where he listed out the specific topics he felt were important to address and said that Hillary has now weighed in on them and he’d like to see Trump do the same.

I just read Hillary’s briefing carefully to understand what I agreed with, disagreed with, and thought needed more fleshing out. I didn’t fundamentally disagree with anything and was delighted to see a number of the initiatives I’ve been working on included. Regular readers of this blog will see lots of congruency with my efforts around National Center for Woman and Information Technology, Startup Communities, Startup Visa, Global EIR Coalition, Techstars Foundation, Net Neutrality, Open Internet, and Patent Reform.

Similar to my post yesterday on the agenda for the The Center for American Entrepreneurship I’m going to list the outline of the initiatives as an easily accessible overview. If this topic is interesting to you, it’s worth spending ten minutes and reading the full text of the Hillary Clinton Initiative on Technology & Innovation. And, in all seriousness, I hope Donald Trump puts out something similar so we can compare them.

Setting Rules of the Road to Promote Innovation While Protecting Privacy

Book: Where The Jobs Are

When I know, work with, and respect more than 50% of the board of a new non-profit, I pay attention. I’m glad I did – the conversation with John was stimulating. He has a vision and the experience to create a non-partisan organization to engage and educate people, especially policymakers in government, regarding the critical importance of entrepreneurs and startups to innovation, economic growth, and job creation.

While that might sound like a mouthful, I’ve been railing against the limitations of the way our government thinks about entrepreneurship for a decade. I’ve had a number of meetings over the years with the Small Business Administration (SBA) whose name says it all. I’ve often encouraged them to rename themselves the High Growth Entrepreneurship Administration, or even to create a separate organization, or split the SBA in two, or, in a fit of libertarianism, eliminate the SBA altogether. But, I know that none of that is going to happen because of a number of factors, including the fundamental lack of understanding in government about the difference between small business and high growth entrepreneurial businesses. Oh, and inertia.

Over the last few years, I’ve been exploring the idea that we really have two types of small businesses: local businesses and startup businesses. Both are important, but they have very different needs and contribute to the fabric of our economy in very different ways. As John and I were talking, he slid his book, Where The Jobs Are: Entrepreneurship and the Soul of the American Economy, across the table to me. I turned the pages and then over the weekend I read it while laying on the couch after a run.

It’s a great book that every policy maker in government at any level should read. It’s the first book I’ve seen that lays out an effective set of policy recommendations, with substantiation, for the startup society that we are living in. Against the backdrop of total government confusion about economic growth dynamics, combined with endless shallow rhetoric about what to do, I found it to be refreshingly optimistic.

While The Center For American Entrepreneurship website has a series of pages describing the issues and solutions to them, I didn’t find a crisp summary of the book on the web. So I decided to create an outline of the policies and the recommendations. They follow. If you disagree with any, or have any to add, please toss them in the comments as I evolve this as a list of “ways government can help startup communities.”

“Not Enough People with the Skills We Need”

“Our Immigration Policies Are Insane”

“Not All Good Ideas Get Funded Anymore”

“Regulations Are Killing Us”

“Tax Payments Can Be the Difference between Survival and Failure”

“There’s Too Much Uncertainty – and It’s Washington’s Fault

The Declaration of Internet Freedom

I started off my morning by reading the Declaration of Independence. I never get tired of reading it or pondering what was going on at the time. It’s hard to transport myself back to July 4th, 1776 but it’s pretty remarkable to think about what was going on that caused 56 people to sign this brilliant document and in one moment start our country on amazing course over the next 236 years that have had a profound impact on the history of the world.

If you haven’t read it in a while – go read it. I’ll be here when you get back.

On Monday, a group of people including me and my partners at Foundry Group signed on to the Declaration of Internet Freedom. I found the preamble and the declaration itself to be powerful and profoundly important. Following is the preamble.

We are joining an international movement to defend our freedoms because we believe that they are worth fighting for.

Let’s discuss these principles — agree or disagree with them, debate them, translate them, make them your own and broaden the discussion with your community — as only the Internet can make possible.

Join us in keeping the Internet free and open.

Here is the Declaration of Internet Freedom. If you support this, either sign up your company or sign up as an individual. It’s open source so if you have comments or suggestions for improving it, please weigh in on Github, Cheezburger, reddit, or TechDirt. The Internet needs you. 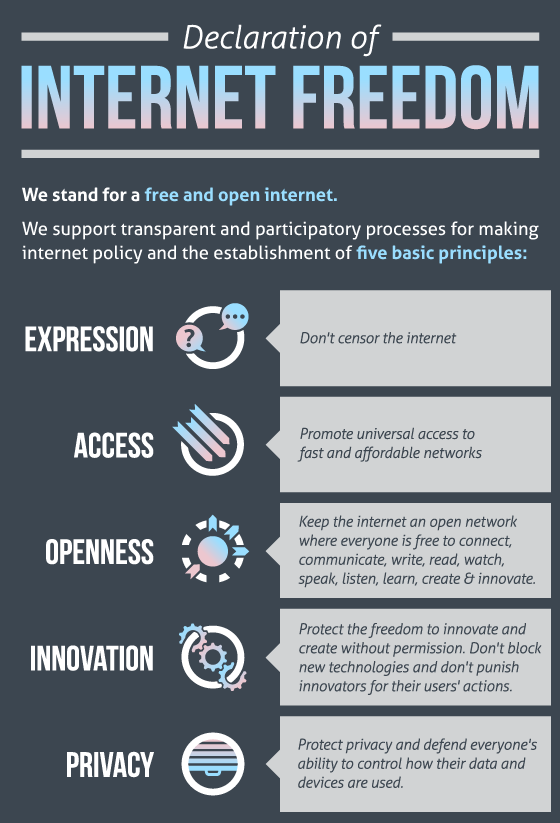