May the 4th Be With You

Welcome to Force Friday, one of my favorite days of the year. I still fondly remember watching Star Wars with my dad when I was 11. As I walked out of the theater, I asked him if we could buy another ticket right then and watch it again. He denied me that night, but we went and saw it again a few days later.

Sphero just released two new droids, R2-D2 and BB-9E, which now rounds out the family that includes BB-8 and the Force Band (so you can control the droids with the Force).

Next up is the littleBits Droid Inventor Kit.

May the Force be with you.

Through the Looking Glass

He took his vorpal sword in hand:
Long time the manxome foe he sought —
So rested he by the Tumtum tree,
And stood awhile in thought.

Jabberwocky and the vorpal sword always makes me think of Princess Leia saying “Help me Obi-Wan Kenobi you’re my only hope.”

One, two! One, two! And through and through
The vorpal blade went snicker-snack!
He left it dead, and with its head
He went galumphing back.

I can almost see Obi-Wan swinging his lightsaber.

It delights me that we’ve invested in a company called Looking Glass who is making their own version of a vorpal sword.

Well, ok, it’s a volumetric display. But we’ll get there …

We’ve been investing in stuff around 3D since we started Foundry Group in 2007. Our first 3D-related investment was Oblong, which has reinvented the way we engage with computers (which we call infopresence) through the use of their 3D spatial operating system called g-speak and their collaboration product Mezzanine.

Well before the current generation of VR/AR/MR/XR/whateverR came about, we focused our attention and investing in the notion of a radical change in human computer interaction (HCI). We believed that in 2007 we were at the beginning of a 30+ year shift that would make the WIMP interface, which emerged in the early 1980s and was dominant in 2007, look and feel punch-card archaic in the future.

While we dig the moniker XR (for extended reality), we are much more interested in, well, reality. Our investments in 3D printing, first with MakerBot (the first successful consumer 3D printer) and now with Formlabs and Glowforge, cross the boundary between designing in 3D and making physical things. Our investment in Occipital has changed how we, and many others, think about 3D inputs and what to do with them. And life wouldn’t be much fun if you couldn’t play Rock Band in 3D, so Harmonix has you covered there.

So, why Looking Glass? After Stratasys acquired MakerBot for over $400m in 2013, we didn’t pay much attention to 3D printing for a few years. But, in 2015, when we invested in Glowforge, we realized that we had only begun to play out physical interaction with 3D. The industrial laser cutter market presented the same opportunity as the industrial 3D printer market, and hence our investment in the first 3D Laser Printer.

In 2016, when we invested in Formlabs, we had another insight that was reinforced by one of the ubiquitous Gartner Hype Cycle graphs. I think it speaks for itself. 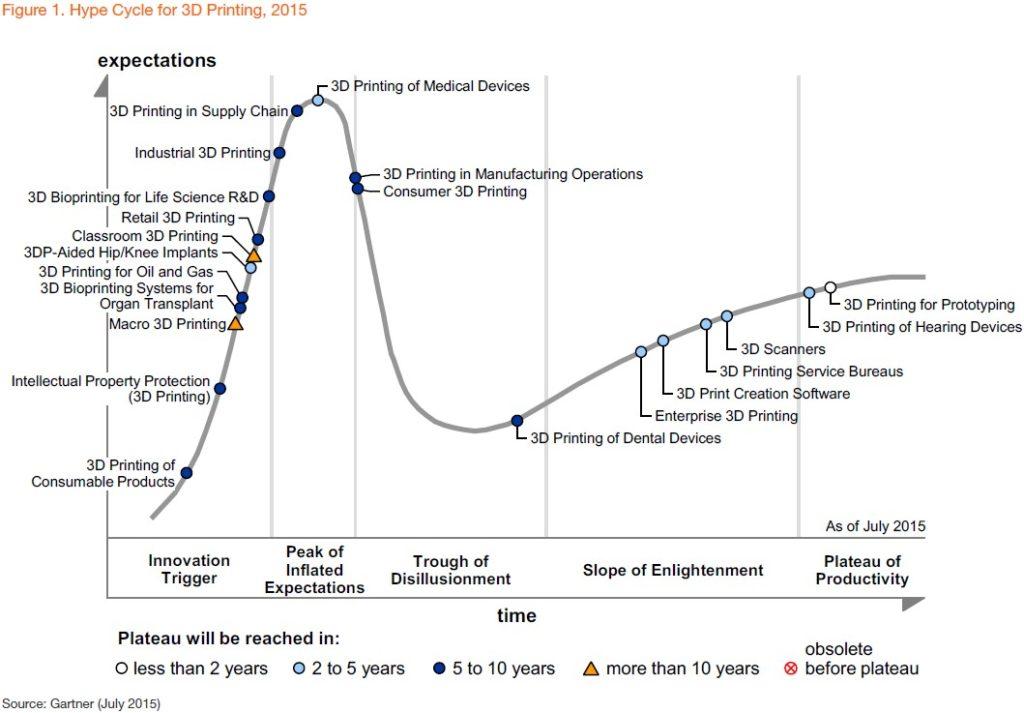 We are now enjoying market leadership during the plateau of productivity.

One day, I was in Jeff Clavier’s office at SoftTech VC in San Francisco. He made me sit down with Shawn Frayne, the CEO of Looking Glass. Thirty minutes later, I called John Underkoffler, the CEO of Oblong, and said “John, I finally saw what you were trying to create with your holographic camera.”

Did I mention that John was one of the inventors, in 1990, of the holographic camera?

And, as a bonus, the physical camera, which for over 20 years lived in the basement of my close friend Warren Katz’s house, now lives in my Carriage House in Longmont. It’s in several pieces, but that’s a detail that some day John will remedy.

It was an easy decision to invest in Looking Glass.

`Twas brillig, and the slithy toves
Did gyre and gimble in the wabe;
All mimsy were the borogoves,
And the mome raths outgrabe.

The Force Awakens This Week

The Force Awakens has been particularly exciting to me since we are investors in Sphero. If you haven’t seen BB-8 from Sphero yet, take a look.

I watched Star Wars for the first time the week it came out in 1977. I was 11. I’ve been an unashamed Star Wars fan since then, loving almost every moment except for the ones I had to suffer through with Jar Jar Binks. It turns out that I’m about six months older than J.J. Abrams so I feel similar to him about Star Wars.

“I was 11 when I saw the first ‘Star Wars’ and my mind was blown,” he says. “It was everything. It was funny, it was surprising, it was aesthetically gorgeous. It had designs and effects you’d never seen before. It had the most incredible sound effects and music you’d ever heard. It had amazing characters who grabbed you by the heart. It was spiritual. It was filled with adventure. On every level, it was just this incredible thing. If it had only looked that cool, or had that great script, people would still be talking about it. But it had all of it. It reminds me of the Beatles, the way, for any other band, any one of their songs would have been enough for a career. But they did it all — the way George Lucas, somehow through his brilliance, did it all.”

BB-8 is so deeply awesome. If you don’t have one yet, you know you want one. See you at the movies.

This Is The Droid You Are Looking For

One of the most enjoyable things I get to do in my job is to be involved in creating amazingly fun products. If you hang around in our office at Foundry Group you see plenty of Makerbots, Fitbits, an Oblong Mezzanine, an Occipital Structure Sensor, ModRobotics Cubelets, littleBits, 3D Robotics drones, and Spheros.

Now we’ve got some BB-8s (from Sphero) in our office. And if you want one, you can buy one right now.

The story of Sphero and BB-8 makes me smile a huge smile. I’m a massive Star Wars fan and saw the first Star Wars movie in 1977 when I was 11. I had a digital LED Star Wars watch from Texas Instruments that I wore proudly every day. Recently, I’ve been wearing Star Wars Vans. Yoda adorns lots of spaces in my world and “Do or do not, there is no try” is one of my mantras.

Sphero was originally known as Gearbox when it entered Techstars in Boulder in 2010. It’s origin story is summarized in the Techstars Founder Stories series and our journey with Ian Bernstein, Adam Wilson, Paul Berberian, and the team they subsequently assembled has been awesome.

Shortly after we led the seed round the company changed its name to Orbotix. It released its first product – Sphero – a little over a year later and was off to the races.

Last year, Orbotix did an unusual thing. With two successful products under its belt (Sphero and Ollie), the team was working on the next product concept. At the same time, Techstars had partnered with Disney to create the Disney Accelerator. While Orbotix was now a substantial company (with around 50 people), Paul, Ian, and Adam decided to go through the Disney Accelerator to create their next product. They had no idea what it would be, but they just wanted to isolate themselves from the rest of the company and invent the next thing. Paul spent 50% of his time in LA and the other 50% of his time in Boulder. Ian and Adam spent 100% of their time in LA and went through the first Disney Accelerator program.

The story of how BB-8 came out of this has been talked about plenty of times including an article in Wired and this morning on the front page of the Denver Post. It’s a great example of the power of a prepared mind, magical technology, and the Techstars corporate accelerator dynamic.

Today, Orbotix is called Sphero. The latest product from Sphero is BB-8. And, as a Star Wars geek, I couldn’t be happier to have a tiny part in bringing BB-8 to life.