I love Scott Kveton, the CEO of Urban Airship. He and his team are building an amazing company in Portland. If you do anything mobile-related and use push notifications of any sort, or real-time location targeting, you need to be talking to them. But even more impressive is how Scott leads his company.

The other day, I got an email from my partner Jason with a photo of the Urban Airship Meeting Rules posted on the wall. They are so logical as to be rules that should apply to every meeting at every startup from now until forever. 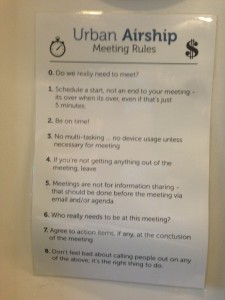 1. Schedule a start, not an end to your meeting – its over when its over, even if that’s just 5 minutes.

3. No multi-tasking … no device usage unless necessary for meeting

4. If you’re not getting anything out of the meeting, leave

5. Meetings are not for information sharing – that should be done before the meeting via email and/or agenda

6. Who really needs to be at this meeting?

7. Agree to action items, if any, at the conclusion of the meeting

8. Don’t feel bad about calling people out on any of the above; it’s the right thing to do.

I particularly love 0, 1, and 4. I rarely walk out of a meeting when I’m not getting anything out of it. I’m going to start paying more attention to this one.

Last week we announced our investment in Awe.sm. It’s squarely in our Glue and Protocol themes and is similar to investments we’ve made in SendGrid (for transactional email infrastructure) and Urban Airship (for push notification infrastructure). Oh – and the founders – Jonathan Strauss and Laurie Voss are – well – awesome.

We love things that wire the web together and believe Awe.sm is the company to do that for the construct of “sharing.” Specifically, Awe.sm’s goal is to become the key infrastructure provider powering quantitative performance marketing across the social sharing channel.

If you are a developer of a web app, take a look at how Awe.sm’s platform can help you.

Fred Wilson had an excellent post up this morning titled Social Media’s Secret Weapon – Email. I completely agree that email is the key communications channel for social media and have written about this before in posts like 100% Click Through Rate, Email – The Original Social Graph and Email Is Still The Best Login.

I’ve been investing in email related stuff for over 15 years going back to Email Publishing, my very first Boulder-based investment which I believe was the very first email service provider (ESP) and was acquired by MessageMedia which was then bought by Doubleclick. Fred and I are both investors in Return Path which he calls out in his post as the category creator and market leader in email deliverability. I love Return Path as a company and am incredibly proud of what they’ve done as a business.

My partners and I have continued to invest aggressively in what we believe is social media’s secret weapon which we refer to as the comm channel in a hat tip to the TV show 24. In Fred’s post, the comm channel is email. Our investment here is in SendGrid, a company that came out of TechStars Boulder 2009 and is one of the white hot companies in Boulder. They directly address the problem Fred describes which every software developer knows is a pain in the ass, uninteresting, hard to do well, but needs to be done right. Every web app sends transactional email – rather than build all the code yourself, just let SendGrid to it. They are now doing it for over 24,000 companies, sending out over 60 million transactional emails a day, and just sent their 10 billionth transactional email.

My message to all web developers – if you are serious about what you are doing, focus on your app. Don’t waste precious development time on all the activities around the app. You likely no longer sit around with a screwdriver setting up a server in a datacenter – instead you are using a cloud provider like Rackspace or Amazon.  Don’t spent your time coding up an email notification infrastructure – use SendGrid. And if you are a mobile developer, don’t waste your time writing a bunch of code for push notifications – use Urban Airship.

Most importantly, don’t ignore the thing that will actually make your web app get adoption and retention – comm channels!