One of the super crazy fun companies we are investors in is Betabrand. At this point, half of my new wardrobe comes from them.

They are hunting for a new amazing UI/UX developer. But – to show how much they want someone, they’ve designed an incredibly hideous new look for their site.

They’ve got blink tags, Comic Sans, spinning boxes, Nyan cat cursors, Papyrus, an on fire Under Construction prompt, and really bad color overlays. It reminds me of a Geocities page I once created.

Help our friends at Betabrand out. If you are a UI/UX god or goddess, here’s what they are looking for. And – while you are at it – buy some new disco pants.

Every year or so I freshen up the Feld Thoughts design. This time I did it with the help of Cole Morrison, who is the Hackstar I hired at the end of last year.

I’ve gotten some feedback so far but am looking for more. And I’m happy to get whatever you’ve got for us – nice, constructive, or harsh. Whatever comes to mind – just toss it in the comments or email it.

For an example of “substantial” and “harsh” take a look at this. Like all helpful feedback, it’s very precise and actionable. 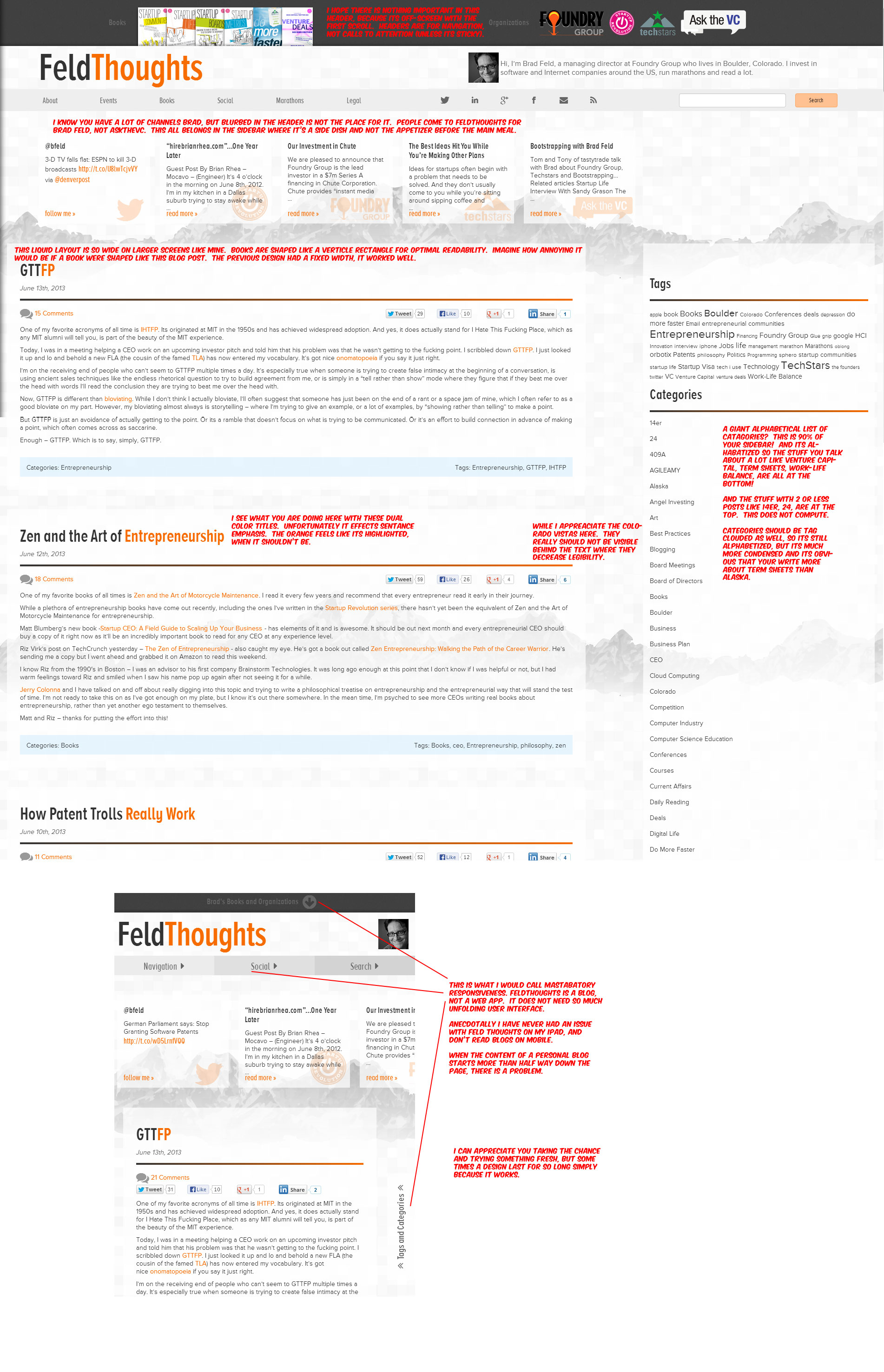 Who Owns Your UX Philosophy?

I’ve been in three board meetings in the last month where it was painfully apparent that there wasn’t a person in the company who owned the UX philosophy of the product. I’m explicitly saying “UX” (user experience) rather than “UI” (user interface) as each company had an excellent designer and the application looked great. But the UX broke down quickly, especially as you went from novice first time user to experienced user.

Now, it’s not that the apps sucks. In each case, the apps ranged from good to great. They had huge amount of functionality, did unique things that other apps didn’t do, and solved a clear set of problems in a compelling way. They were fast, pretty, used nice fonts, and had good screen layouts.

But each had a jumble of different ways of doing things. As you went from one set of activities to another, the approach quickly became inconsistent. I kept noticing that my when I was doing a different set of things in the app, the user flow would change. Or when I switched modalities, I would have different ways to do things that were dependent on where in the app I was.

Sometimes I’d click on a label to take an action; other times I’d click on a text description of the action. In some places I cared a lot about the Tab key; in others it was the Enter key. In some screens data was automatically saved after I exited a field; in others I had to take an explicit action. In some situations all the actions I could take were exposed; in others I had to search a menu tree for them. Orientation of the iPhone mattered in some cases and didn’t in others. Sometimes the key set of data that I was working on was the focus on the screen; in others it was only part of the screen.

In each of the companies, there is an excellent VP of Engineering. They each have a strong design / UI person. Two of the three had founder/CTOs. And the CEOs in each are excellent. They are each obsessed about the product, but they are approaching it from an engineering perspective. What are the features that the user needs? What is the feedback we are getting about what individuals want to do? Each of these things ends up being a story or a task – a feature – but there is no unifying UX philosophy.

I’m noticing this more and more in the different apps I use, especially at the early stage. Some are crafted beautifully from a UI perspective, but once I start using them on a daily basis I want to scream. Others have acceptable UIs and a layer of UX consistency that breaks down immediately when I become an advanced user. And others are radically different UX experiences across devices.

I’ve come to appreciate the important of a single person in the company owning the UX with this person being the arbiter of discussion around how to implement the UX. There’s nothing wrong with lots of different perspectives, but a single mind has to own it, synthesize it, and dictate the philosophy. But first, they have to understand the difference between UI and UX, and – more importantly – the product-oriented execs who approach things from an engineering perspective need to understand this.

I’ve decided it times to up our game significantly on this. I’m curious about what resources you rely on, thing are amazing, and would give to an executive team that is struggling with this.

My friends at Slice of Lime are growing. If you don’t know them, they are a local Boulder company that we use for a bunch of UX / UI / web stuff for ourselves and a number of companies we invest in.

If you are a Senior UX person looking for a new gig, go apply now. Following is more info on Slice of Lime and the position.

We’re a 11+ year old business that specializes in creating marketing websites and user interface design for web apps and mobile apps. We work with a wide range of clients including technology startups and big brands. We’re consistantly recognized as one of the fastest growing companies and top ten in our industry in Boulder.

We’re looking for an individual that can:

We practice agile methodologies with our UX/UI work and have fine tuned our process to work seamlessly with our clients’ internal or external development teams.

Slice of Lime offers a great work environment with a focus on “creating amazing experiences” for our clients and ourselves. We offer wonderful health insurance, a generous vacation plan, $500 to spend on work-releated materials and gear every 6 months, and a competitive salary. We’re located in the heart of downtown Boulder and can’t wait to meet the new member of our team. We hope it’s you!

As some of you may know, we made a modest investment in Slice of Lime in 2007. This year, Slice of Lime is celebrating 10 years of being in business. This is a huge accomplishment and we couldn’t be more proud of the business Kevin, Jeff, and Daniel have built.

Slice of Lime has done web strategy, design, and development work for many of the companies we’ve invested in over the years including BigDoor, BrightLeaf, and Orbotix (new site launching soon) as well as our own Foundry Group website. They’re consistently listed as Top 10 in their industry and one of the fastest growing companies in Boulder County.

With any business that’s been around that long, there’s always an entertaining history of stories behind it. To showcase this, Slice of Lime created a 10 Year Anniversary Site.

Perhaps what’s most exciting about Slice of Lime these days is their new focus. As of 2011, Slice of Lime has introduced “User Interface Design for Web Apps and Mobile Apps” as a service. This move is supported by their excellent UI work over the last few years for clients like Troy Aikman Fantasy QB, Prediculous, BlipSnips, Denver Art Museum, Envysion, GeoPalz, and Etsy.

While Slice of Lime will continue to provide amazing marketing websites for their clients, this new service is a logical evolution. Many companies have strong development resources that can create the functionality of an app, but need help when it comes to user interface design and user experience. That’s where Slice of Lime gets plugged in and can really make a difference.

Congratulation to the Slice of Lime team – here’s to another 10 years!