In a world of endless signal and noise coming at us from all angles including TV, radio, the web, Facebook, Twitter, Snapchat, blog posts, email, text messages, Slack, and fill in another 50 different sources of stuff, we don’t have a measurement for the sentiment of the noise (and signal) and the toll it takes on our thinking.

If you pay attention to finance, you are familiar with the VIX, which is officially the implied volatility of S&P 500 index options. It’s unofficially known as the fear index and is a measure of the market’s expectation of stock market volatility over the next 30 days. For example, here’s the VIX for the past 12 months. 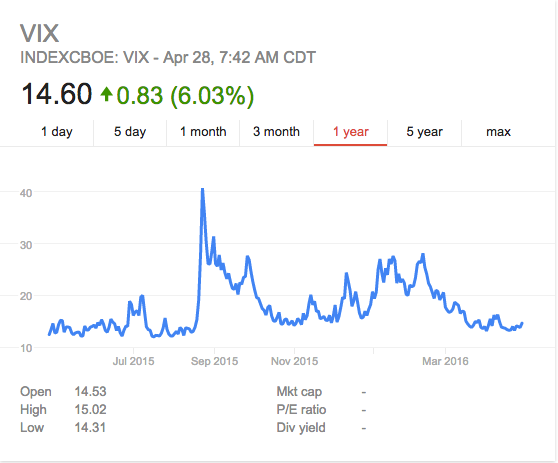 I don’t pay attention to the VIX on a daily basis as I don’t care about the stock market but I find it interesting in hindsight to see how it correlates to changes in the DJIA over a long period of time. 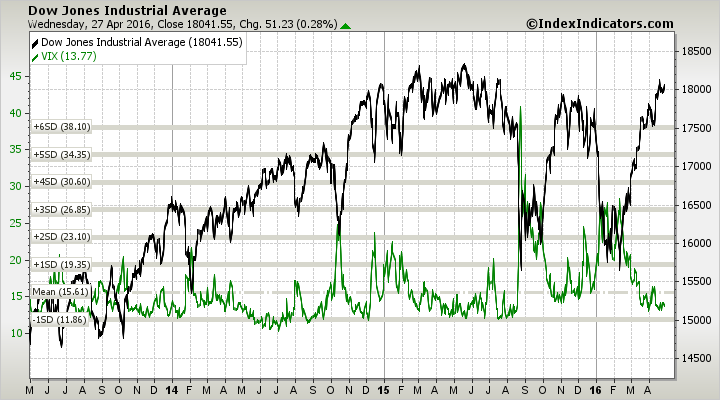 In February, I was pondering the tone of the noise – and the signal – that was coming my way. If I had a measure for it the fear in it, it tracked the VIX pretty well (a sharply increasing level with a peak some time in early March followed by a rapid decline back to normal). At the same time, the cognitive load from my daily life (work and personal) increased very significantly in Q1 due to a series of things good and bad.

I reached a point in March where I actually said out loud to someone “I can’t take on anything new – my cognitive load is maxed.” I literally couldn’t think about anything beyond what I was currently trying to process. While I’m still at a high load, I don’t feel anywhere near as maxed as I did at the end of March.

In the past 24 hours I’ve responded to a few emails that were particularly tone deaf to reality. The level of aggression in the noise seems unusually high these days. The random hostility from people I don’t know very well, but who feel like it’s an effective personal strategy to attack as a way to get attention, seems at an all time high. I presume some of this is from our current political cycle and the corresponding tone, but I could be coming from other dynamics as well.

Regardless of how zen one is, all of the noise, signal, interactions, and life activity creates a cognitive load. While I’m not sure a macro measure – like the VIX – is useful, I certainly feel like a personal one would be.