That Was A Yes Or No Question

I think I’ll avoid all the “are super angels colluding“, “no they aren’t“, “go fuck yourself and stop talking horseshit“, and “guys, quit being narcissistic and do something productive” blog chatter today and focus on something that came up yesterday.

I was on a call when someone asked a straightforward question that had a binary answer (yes or no).  The person responded with a five minute explanation with a lot of details, all factually correct and contextually relevant, but at the end still didn’t answer the question.

My partner in my first company (Dave Jilk – now the CEO of Standing Cloud) used to have an endearing way of dealing with this.  Here’s how it would play out.

Dave: “Is the release going to be on time?”

Software Engineer Dave was Talking To: “Blah blah blah, five minute explanation of all the things that he was struggling with, why everything was difficult, what the risks were on timing, blah blah blah, why the client was giving mixed signals and changing things, and can’t I have a faster computer please?”

Dave: “That was a yes or no question.”

We spend a lot of time getting derailed in our work.  I’m as guilty of it as anyone as I often answer a question with a story from my experience. Sometimes that’s a helpful thing to do; other times I should just answer “yes” or “no.”

The corollary to this is to ask why.  I’m a huge fan of the 5 Whys approach and went through it with a long time friend and CEO of a company I have an angel investment in at dinner last night.  He’s been struggling with some stuff and I explained how (and why) he should be using 5 Whys to try to get to the root cause of the issue, rather than staying on the surface and not actually learning anything. In his case he was experiencing the opposite of the yes/no problem – he was trying to ask an open ended question and getting a yes/no answer.  For example:

CEO Friend: “Are the trials converting into customers?”

The appropriate response from my CEO Friend in this case would have been “Why?”  And I’d predict he’d need to ask “why?” several (four?) more times before he got enough information to actually know what was going on.

I encourage all CEO’s in the world to use these two approaches judiciously.  Don’t ask me why – just do it.

The Power of Why

Simon Sinek’s TED Talk from TedxPuget Sound (Sept 2009) has been posted and is just awesome.  He starts out with the question “Why is Apple so innovative,“ Why is it that Martin Luther King led the civil rights movement,” and  “Why is it that the Wright Brothers were able to figure out controlled power manned flight?”

He answers this by describing something he calls the Golden Circle: 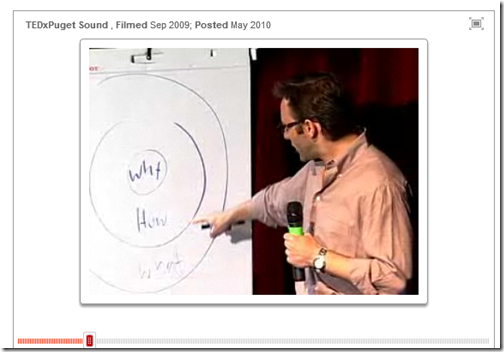 Every single organization knows WHAT they do.  Some know HOW they do it.  Very few people and organizations know WHY they do what they do, where WHY is “what’s your purpose, your cause, your belief; why do you get out of bed in the morning; why should anyone care.”

Find a quiet space and listen carefully to this TED Talk for 18 minutes.  Then spend at least the next 12 minutes thinking about your WHY.