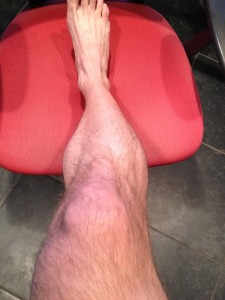 I get to work with a lot of great CEOs. When I reflect on what makes them great, one thing sticks out – they are always building their muscles. All of them.

As a marathon runner, I’ve got massive legs. Marathoner legs. They’ll look familiar to anyone who runs a lot. In contrast, I have a wimpy upper body. I’ve never enjoyed lifting weights. So I don’t spend any time on it.

I’d be a much better marathon runner if I worked on a bunch of other muscles as well. I’m starting to get into a swimming regimen, I’m riding my new bike around town and this summer I’ve got pilates three days a week as a goal of making it a habit. By the end of summer I hope to have a bunch of other muscles developing and a set of habits that enables me to finally maintain them.

The key phrase above is “I’ve never enjoyed lifting weights.” When asked, I say I’m bad at it. Or that I simply don’t like it. Or, when I’m feeling punchy, that jews don’t lift weights.

Of course, these are just excuses for not working on another set of muscles. If I don’t like lifting weights, surely there are things I like doing instead. I’ve always been a good swimmer – why don’t I have the discipline to go to the pool three days a week and swim? Most hotels I stay in have a swimming pool or have a health club nearby. Swimming is as easy as running – you just get in the pool and go.

“I’m bad at it and I don’t like it.” That’s what runs through my head when I lift weights. For a while, I used this narrative with swimming. But when I really think about swimming, the narrative should be “I’m ok at it and I like it.”

So why don’t I do it? I don’t really know, but I think it’s because the particular muscles I use when I swim are intellectually linked to the weight lifting muscles, which gets me into a loop of “I’m bad at it and I don’t like it.” So rather than break the cycle, I let my muscles atrophy.

Yoga is the same way. I struggle with Ashtanga Vinyasa Yoga. It’s too fast for me, I struggle to remember the poses, and my glasses constantly fall off, and I can’t follow what’s going on. So I say “I’m bad at it and I don’t like it” and then don’t do it. But I do like Bikram Yoga. It’s slower, there are the same 26 poses, and I like the heat. So why don’t I do it? Once again, the narrative gets confused in my mind and it turns into “I don’t like yoga.”

All of this is incredibly self-limiting. Rather than fight with “I’m bad at it and I don’t like it” how about changing it to “I’m not good at it but I’m going to try new approaches and find something I like.” There are many different approaches to building a particular muscle so rather than use a one-size fits all approach (e.g. I must go lift weights, which I hate), search for a different approach that you like.

If you want to be a great CEO, you need to be constantly building all of your muscles. There are going to be a lot of areas you think you aren’t good at. Rather than avoid them, or decide you don’t like them, figure out another way to work on these muscles. You’ll be a better, and much more effective CEO as a result.