Start Every Board Meeting With A Demo

I find three hour “reporting board meetings” where everyone sits around and goes through a 50 page PowerPoint deck to be tedious. When I first started investing in 1994, this was the norm. I put up with it even though it wasn’t my style because (a) I didn’t know better and (b) I didn’t have any better ideas. 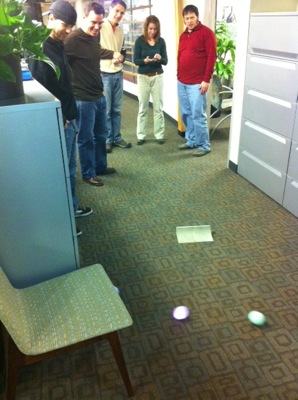 27,351 board meetings later, I know there is a better way. I’ve encouraged everyone I work with to try different approaches. I’ve written about some of my favorites in the past, such as doing an entire board meeting off of one slide with a list of “top of mind” items that the CEO has (this assumes that all the board material – appropriate data about the business, financials, and any department updates, have been previously circulated and consumed by all board members.)

Another one of my favorites is to start a board meeting off with a demo. Today, we had the Orbotix board meeting at our office. We spend the first 15 minutes playing with Sphero, the robotic ball that is Orbotix first product (and available for pre-order now.) We then spent the rest of the board meeting talking about the key issues. Paul Berberian, the CEO, had an agenda which we generally covered, but we were able to have real discussions about real things, rather than just a bunch of “arm crossed people starting at a PowerPoint presentation on the wall.”

This stood out in contrast to another board meeting I had later in the day. I attended this one by phone. It was for a company that is doing superbly, but was a very old school style meeting. 54 slides later the meeting ended. There was plenty of information covered and the management team presented everything really well (as usual – it’s a gang that has their act together), but there were only a few parts of the meeting where we had space jams (think of the Grateful Dead on a 25 minute riff that is the best part of the concert.)

Yup – there are plenty of different ways to skin a cat. Or play with a robotic smart ball. If you are a CEO, don’t be afraid to try different things. And, if you want to see who the real fan of a robotic smart ball is, take a look at the video below (and if you like it, vote it up on LOLDogs.)