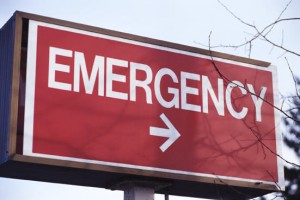 Many of the companies that we invest in are the leaders in their respective markets. Often they create the market. Sometimes they appear out of no where and dominate. And sometimes they are in a brutal fight every day with another company or two for market leadership. We don’t care which case it is – we just want to be investors in the companies that are #1 or #2 (and have a chance to be #1) in their markets.

Whenever a market leader I’m an investor in is threatened by a competitor, I’ve encouraged them to call a Code Red like they do on ER. In a Code Red situation, every who can is focused on the threat for a short, intense period of time. If the company is less than 10 people, this is easy. But if it is 50 people or more, it’s really hard. And – at 1000+ people, it’s a magic trick to get it right.

When the CEO calls a Code Red, there is often a negative reaction from parts of the organization ranging from sales, development, to operations. Often some people in the organization don’t believe or understand the need for a Code Red. Other times they’ve been through so many unnecessary fire drills in other companies that they don’t believe the Code Red is real. They simply don’t see the same threat the CEO sees. Or they feel undermined by the CEO.

Part of the CEO’s job is to call a Code Red correctly. If you call it every other week, it’s not a Code Red, it’s shitty management and leadership. If you never call it, you’ll one day find yourself no longer the market leader. There’s no right tempo – it’s random, but as with many things you’ll know the moment when you encounter it.

A Code Red can’t last forever. It has to be incredibly focused on the specific threat you trying to address. It has to be clearly communicated across the entire company. It has to be quantitative – once you’ve effectively neutralized the threat, the Code Red is over. This might be in an hour, a day, a week, or a month. But if it lasts much longer than a month, something else is wrong.

I know some people who like to use DEFCON 1 instead of Code Red. I don’t – it’s too nuanced – who cares about the difference between DEFCON 3 and DEFCON 1 – you are in a critical situation. Make it binary.

I know some managers who hate the idea of ever being in a Code Red situation. This is unrealistic view to take in a startup or fast growing company. Once you are a visible leader, people will be gunning for you, imitating you, or coming out with products that disrupt your business. Welcome to being a market leader – own it and when a Code Red occurs use it to propel your business into an even more dominant leadership position to build on. And – for every employee in a company having a Code Red – take it seriously and crush it – the rewards will be quick and obvious and the downside of not dealing with it sucks.