Participate in the Context.IO App Challenge

Dealing with email is something I have become an expert in out of necessity. While it’s out of control, it’s a chore that is wired into my work in a deep way that, regardless of the explosion of real time communication channels, will likely continue to be the least common denominator for communication for the next 100 years.

That is one of the reasons why I’m interested in seeing the projects that come out of the Context.IO App Challenge, a long-format online hackathon that I’ll be judging in a few weeks along with David Cohen, Fred Wilson, Matt Blumberg and Josh Baer.

Context.IO is a product of Return Path, where I’ve been on the board since 2000. It’s an API that developers can use to build applications that integrate their users’ email data (contacts, files, messages, threads, receipts, and rule-based notifications). We’re expecting to see a healthy mix of inbox management tools along with apps that deliver value in other ways outside the inbox. A few of my favorites that have been built in the past using Context.IO are Mailtime, Paribus or Airhelp.

A common question is if projects from a hackathon can become a successful business. Not all ideas will be winners and it depends on the goals of the event and participants. There is certainly a higher chance with an online hackathon like this one where you have months to build something amazing instead of 24-48 hours. One of our portfolio companies, WootMath,  won a similar App Challenge back in 2013.

In some ways, the judging criteria we’ll all be working from are basic questions any founder should ask themselves:

I’m looking forward to seeing what gets built.

The National Day of Civic Hacking

The open data movement is great for business, but is also great for us as citizens.  To accelerate that program, President Obama and US CTO Todd Park have created a national event to leverage technology and open data to strengthen our democracy in the United States.

On June 1st and 2nd the largest hackathon in the world is forming. Over 5000 people in 87 locations will be joining up to use their talents to make their communities a better place. The National Day of Civic Hacking is the first of a yearly event created by the White House to gather Citizen Engineers and have them use newly accessible government data to improve their communities and our entire society. The multitude of data that is being released as part of the Open Data Initiatives.

A company I’ve been involved for a long time with – Rally Software – is taking a leadership role in this. Rally’s product development team is devoting their talent and energy to participate and host the Boulder, Denver, Seattle, and Raleigh event (join up at these locations.) Through their corporate social responsibility initiative, Rally for Impact they are offering an exclusive and complimentary one-year subscription to AgileZen and Flowdock to all participants of the National Day of Civic Hacking.

Specifically for Coloradans, there are sites in Denver and Boulder.  In Denver, the site is focused on open data from the State of Colorado and called Hack4Colorado.  In Boulder, the Boulder Civic Hackfest, is focused on local data, the Census Bureau and the National Renewable Energy Lab’s Open Energy Info project. On Saturday, NREL engineers will join the local civic hackers too.  Hacking isn’t just about writing code, it’s about exploring the boundaries of what’s doable and what’s desirable.

Rally is also donating three seats to their  Enterprise Lean Startup training course to this effort.  This highly interactive workshop, on June 5 & 6 in Boulder, teaches you how to systematically discover what’s desirable for users and customers. To claim the training seats be the first three people to send email to rallyforimpact@rallydev.com if you are attending the event in Boulder or Denver.  Awards will be given at the closing of each event in Boulder and Denver by Rally staff.

I’m proud of my long time friends at Rally for providing leadership here!

Last week President Obama played with a Sphero. This weekend you can win up to $5,000 at the Sphero Hackathon in Boulder. It starts Friday May 4th at 6pm with a Welcome Reception (which means beer and Spheros) and runs all day Saturday and Sunday where you can hack with Spheros and the Orbotix SDK. I’ll be around Sunday from 1pm to 3pm taking a look at what people have done, playing around with the apps, and answering any questions about why I think Sphero (and Orbotix – the company that makes Sphero) is so awesome.

Two new apps have recently come out for the Sphero. The first, Chromo, allows you to play with Sphero in a whole new way. While Orbotix’s other apps allow you to control Sphero from your device (kinetically and via a digital joystick), now Sphero is the controller. The video tells the story better than words.

The other app is MacroLab. Did you have a Big Trak as a kid? If not, you missed out, but you can relive those missed moments with MacroLab. As before, let’s start with a quick video.

MacroLab is a tool Orbotix developed for internal purposes that turned out to be so powerful they decided to make it available to all Sphero users. It is essentially a high level abstraction of the API that runs in the ball’s memory that commands the robot. It makes the API accessible to people who don’t know how to program an iOS or Android app.

When a user creates a macro they send a series of commands to the ball. Macros are made by stringing together 27 basic commands (by comparison the SDK has about 300 commands – most are UI/robot housekeeping based but 100 are ball control related). Each command is executed in sequence. Following is an example (called “test”) along with an explanation. 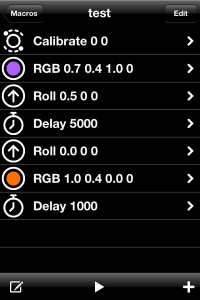 – Calibrate – this zeros out Sphero’s heading so you know which way he will go after you aim him
– RGB – this changes the color of the LED to purple – the numbers are the RGB settings
– Roll 0.5 0 0 – 50% speed (0.5), 0º heading = straight ahead, 0 second wait time before executing next command

If we stopped here the LED will flash purple and Sphero would run away at 50% speed and only stop when you exit the macro. Basically the macro runs for a fraction of a second with an open ended roll command. The Sphero goes white (his default color) after the macro is run. In order to not have an open ended command we need to add some more stuff.

The entire macro runs for 6 seconds. Sphero will turn purple, drive for 5 seconds at 50% speed, stop, turn orange for one second and then end by turning white.

The commands for MacroLab are very basic but powerful enough that Orbotix uses them to run tests on the factory line and form the basis of programs like “Draw N Drive” (every line you draw gets converted to a macro and the ball executes the command). The complete command list follows:

When I first heard the idea for MacroLab I smiled a huge smile. It’s the beginning of Orbotix opening up their robot control language, which is part of the magic behind the premise for our investment in Orbotix. I’m amused when people say “why did you invest in a toy ball company?” when what we really invested in was a bunch of geniuses working on a robotic operating system that happens to start life out as a robot ball that you control with your smartphone.

What are you waiting for? Buy a Sphero today and get started. And come to the Sphero Hackathon in Boulder this weekend.

My friends at Orbotix, a TechStars Boulder 2010 company that Foundry Group invested in recently, are having their second hackathon on 11/13 – 11/14 at their office in Boulder.

Orbotix is the gang that is “reinventing the ball” while also creating smartphone apps that control robots.  The November Hackathon is all about hacking Android apps and there will be a contest that I’ll be judging on Sunday afternoon along with Paul Berberian (Orbotix’s CEO) and Julian Farrior from Backflip Studios.

The Orbotix guys understand that beer and pizza are required at a two day hackathon and there will be plenty of it.  If you are interested, all you need to bring is your Android phone and computer (with Eclipse and the Android SDK) – Orbotix will supply everything else.

The Awesomeness of a Hackathon

Over the years, a number of companies I’ve been an investor in have had hackathons.  These are typically day long events where everyone in the company works on whatever cool new ideas they have.  On Monday night I got a note from a company I’m on the board of about a hackthon they just completed.  As I looked through the list of things that the various teams created, I got chills of excitement.

Most of the companies we invest in release software at least once a month.  Some release weekly, or even daily.  I’ve become a big advocate of true Agile development (partly because of my experience with Rally Software – the leader in Agile software development environments) and – more recently – the notion of trying to get to continuous deployment which has been popularized by Eric Ries.

If you are releasing at least monthly, it’s easy to do a full day hackathon at least once a quarter.  And, rather than have it be an “engineering thing”, you can (and should) make it a full company thing.  Here’s how:

In the best hackathons, there is a wiki that is very dynamic during the hackathon.  This way all of the activity is captured and can be reviewed afterwards.  The goal is not to include everything from the hackathon in future releases; rather it’s to stimulate a bunch of ideas, generate some prototypes, end up with some useful code, but get everyone in the company thinking about all the products.

Not all of the hackathon projects need to be about code.  I’ve seen things like help systems, new web sites, better customer support processes, better management of social media activity, and lots of business process stuff created and implemented during hackathons.

After the hackathon is over, publicize what you’ve done to the world.  FeedBurner used to do a great job of this with a simple blog post that highlighted every project and the teams that worked on them.

Oh – and don’t forget to invite your board members.  If I can make it, I’ll always spend a day at a hackathon.  It’s one of the best ways for me to really engage in and help out the companies I’m involved in.  Plus it’s a blast.